Chicken Little Has a Big Message! 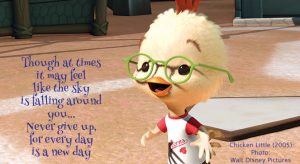 On this day, November 4, in 2005, Walt Disney Pictures released “Chicken Little.”  I think it’s a cute movie that also has good messages about acceptance, believing in yourself and never giving up in fighting for what you believe in.

This quote felt like a caregiver’s cheer. As a caregiver, there were so many times that I felt that the sky was falling around me.  There was, of course, Ben’s actual physical deterioration as his ALS progressed. My increasing caregiving responsibilities were stressful, as was watching Ben struggle, knowing that it wasn’t going to get better but trying to deny it. The emotional toll that took on him was devastating to witness. My giving up was not an option, because Ben needed my help! And, if he wasn’t giving up, even as ALS took away his ability to walk, use his hands, swallow and ultimately, talk, then neither was I!

To be honest, the idea that “every day is a new day” could often be scary. Every day posed the possibility of a new problem. At the same time, every day did present an opportunity for things to be okay, or stable. We hoped for that and there were many good days.  Good days could be times when we had a lot of laughs, or Ben was comfortable, or I was able to transfer him easily and without pain (to either of us), or I made a tasty pureed meal in the food processor. Good days were days without frustration, resentment and sadness. Good days were days that we both felt that I was in control of all that needed to be done.

What did I do when I felt like the sky was falling? Sometimes I gave in to the emotions and cried and that did somehow leave me feeling better and calmer. At other times, I needed to take little “mind breaks.” Computer games and surfing the web often proved to be a good distraction. Watching movies, especially Disney ones, also allowed me to escape while still being present. Writing, whether in my journal, or in my book of Disney inspirations, also helped me to focus and sometimes to work out my feelings. I do find that a nice cup of tea also helps me to slow down and regroup.Emails and texts to my friends helped ease loneliness and reassured me that I had a network of support. I couldn’t go out very often, so keeping up with friends in this way allowed me to feel connected to the world. Sometimes I just sat on the sofa with Disney, my cat, while Ben watched TV in the other room. I needed space and there isn’t much in our tiny NYC apartment. And, if Ben was comfortably settled, a bubble bath was a really great retreat.

In grief, I find that this quote also resonates.  The pain and loneliness can be awful and the idea of shaping a new life can seem impossible, but I never give up and indeed, after a little more than a year, I feel like I’ve cautiously stepped back into life. I certainly have my setbacks, but I know that every day is a new day, and some are better than others. I try to acknowledge every baby step I take as I heal. Indeed, it was a leap forward to go to London and celebrate my birthday last month. It has been a hugely comforting realization that Ben and all of my memories- the carefree, loving ones as well as the ALS and caregiving ones- will always be a part of me.  The future is still daunting, and the present is still lonely and sad, but I have more pleasant days and feel more optimistic now.

I suggest to other caregivers that it’s very important to identify things that make you feel better when it seems that the sky is falling. A network of support is also crucial.  Make a list now, before an emotional crisis, of people and places that you can turn to. Maybe some of my ideas will help you. I wish I knew about the Twitter chat support groups while Ben was still here. I find them useful now, too. If there are things that help you, please share them in the comments. For now, listen to the little chicken’s message!

Not Your Ordinary Walt Disney World Halloween! Have Courage and be Kind