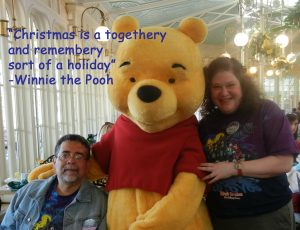 I don’t actually know where this quote is found- if tv, film or books- but in typical Winnie the Pooh fashion, it is sweet and simple, yet profound, in sentiment. I never forget how lucky I am to have beautiful memories, but I do miss the togethery part.

Growing up Jewish, although I dreamed of white Christmases, aside from lovely visits to friends’ homes during the holidays, I did not have my own Christmas until I met Ben. He helped me choose my first real Christmas tree . We chose our ornaments together. He let me decorate the tree by myself because he said he’d never seen anyone get so excited about having and decorating a tree! When Ben was homebound, I had to pick our tree by myself. I admit that despite being very creative, I am not the most visual person. I thought it was a reasonable size. When the man delivered it and put it in the stand, Ben couldn’t stop laughing and just asked, “what did you do?” It was enormous! I called it the tree that almost ate our apartment. That said, it was gorgeous and it lasted very well. We just worked around it! After that, having a real tree became too difficult with all of Ben’s needs and medical supplies. He got me a sparkly pink and silver tree. Of course, I do have all of my Chanukah decorations, too. In my world, they go together beautifully. The lights on the tree are not faring well this year, which makes me sad, because I hate to let go of things that Ben gave me.

As Ben’s ALS progressed, I had to be more creative with his gifts. I loved seeing gifts under the tree, but I hated waiting for him to open them. He preferred opening his gifts on Christmas morning, but relented and let me give him a gift on Christmas Eve. Usually, what was supposed to be an exchange of one gift became an exchange of all gifts, with him reminding me that we would have nothing to open in the morning. The child in me didn’t care…until the morning!

I tried to find practical gifts with some humor, like a Batman apron so he didn’t have to be covered in napkins when he ate, or a baseball cap with an LED light on the brim to aid us on evening excursions with his scooter. There was one year that he was having many problems with his fingers involuntarily curling. I went to the Gap in search of fingerless gloves and ended up buying three different styles. They were hidden in the closet waiting to be wrapped. One evening, Ben was lamenting his cold hands and describing what he thought he needed. I finally got up, went and got one pair, and gave them to him, confessing that they were one of his gifts. He laughed and tried them on. That prompted another description. I sighed, went back to the closet and came out with a second pair. This made him laugh harder. After that trial and more discussion, I threw up my hands and got the final pair. None of them were completely perfect, but he did not like mittens, which would have been the easiest solution for fit but not for navigation of the scooter. That event became one of our jokes, and on my birthday that year he gave me a charm of mittens from Tiffany & Co. It never fails to make me smile.

Yes, Christmas is a remembery sort of holiday.

There was the year that Ben broke his foot right before Christmas. Because his mobility was already impaired, he was completely bedbound for recovery and he was devastated. It was understandable- this was a glimpse of what his life was going to be. That night, to cheer him up, instead of waiting for Christmas, I gave him the DVD set of “The Universe” that he wanted so badly. I thought he would like to watch them while he was in bed. Then, to further console him, I pulled out a Monsters, Inc. projectable (sort of a nightlight that projects onto the ceiling) so that he just had to look up and see Sully and Mike. There was a projectable of a haunted mansion in our room at Walt Disney World that Ben loved, so this was my way of recreating that. Finally, I pulled out the photo collage blanket, so he could cover himself in favorite pictures while he could not get to his computer to look at all of his pictures. Of course, by the time Christmas came, there were not as many gifts!

Before ALS, Ben and I were fortunate to spend a Christmas at Walt Disney World. It was my dream and Ben was always happy to go there. It was crazy but it was magnificent, colorful, festive to the hilt and simply magical.

Now, with the togethery gone and just the remembery, I do feel lonely.  It’s been three years and I never know if those pangs of profound sadness and aloneness should have subsided, but I don’t fight them. I let them run their course and just try to focus more on the good parts, like those I shared here. Of course, I am so grateful for the wonderful, whimsical memories. But, the remembery makes me miss the togethery even more, particularly because Christmas was only really Christmas when my family was Ben.

As I was writing this, I realized that Ben gave me a dream come true when he gave me Christmas and that is a forever gift between only us that, in his honor, even if it’s with tears, I must continue to celebrate. Further, being Ben’s caregiver was, in an almost inexplicable way, a gift because it allowed us to share a unique and deeply loving bond that, honestly, was not always easy to see at the time. With that thought, I made this video of special memories, mostly from our visit to Walt Disney World in the Christmas of 2007, before ALS came into our lives, and then some photos of Disney and our holiday decorations at home. The photo of us with Disney, all in our matching Mickey Mouse pajamas, was our last Christmas and I am thankful that it was a beautiful Christmas. The video is set to a lovely song, My Gift is You, which is a lesser known original Disney holiday song but is not found in a film. It is on one of my favorite compilation albums, Essential Disney Love Songs as well as on Disney’s Merry Little Christmas. Words and Music by Gary Powell. Performed by Craig Hella Johnson and Leslie Whiteley.

I found great truth in these lyrics:
I love a gift wrapped in red
A gift under the tree
When the snow falls lightly for you and for me
But what I like most and what most rings true
Is the way I feel knowing
That my gift is you

I wish everyone a happy and healthy Christmas. 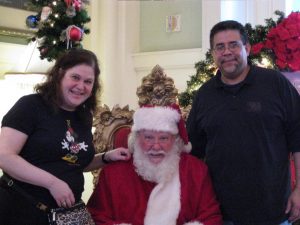