Happy Birthday and Thank you, Goofy! 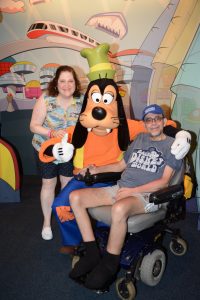 When I think of Goofy, I can’t help but remember all of the fun times that Ben and I had with him. Of course, he’s always a lot of fun- he’s Goofy! But, after Ben’s ALS diagnosis, we learned that there is a whole lot more to his Disney magic than silliness. Goofy was a big dose of comfort to Ben during our last visit to Walt Disney World.

Meeting our Disney buddies was always fun, especially for me, but after Ben’s ALS diagnosis, seeing them, especially Mickey Mouse, became very emotional. Although Ben traveled around the parks in a scooter and then an electric wheelchair, while he still had strength in his legs, he stood up for photos with Mickey, Minnie, Pluto, Goofy and Buzz Lightyear. As his legs weakened, he still tried to stand for Mickey and Minnie.  A couple of times, Mickey even helped me to help  Ben out of the chair and he escorted Ben to the photo spot. During our last trip, in 2014, when Ben would not stand at all, I knew he had truly weakened. Living with him, you might think that it would be more obvious to me that he had deteriorated, and of course you would be correct. However, Ben admitting that he could not stand to meet Mickey was symbolic of his surrendering to ALS and that our life was never going to be the same. I think that Ben was overwhelmed and his tears were a kind of rare plea for help. For magic. It was an overwhelmingly sad and emotional meet and greet, with Ben and me in tears. Mickey had hugs for both of us and I asked him for some magic. With a diagnosis like ALS, you just want to believe in that magic. 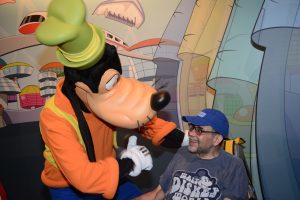 It was actually Goofy who picked up our emotional pieces. He saw me trying to comfort Ben and he knelt down next to Ben, being his Goofy self, and soon enough, Ben was laughing. He hugged Ben, he danced around, and simply didn’t stop “goofing around” until Ben was back in the magic. Goofy knew just what to do and there was nothing Goofy about that! That’s Disney magic.

Thank you and Happy Birthday, Goofy! You are 87 years young, and a forever friend. 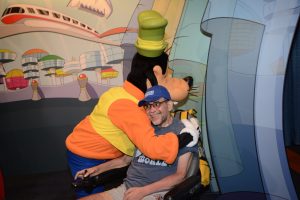 On Mother’s Day: What Disney and I Know About A Mother’s Love With Love and Respect on Memorial Day- Semper Fi, Daddy