Seven Years of Grief- How “The Lion King” Helps Me

As Timon tells Simba in the animated Disney film The Lion King, “Sometimes bad things happen and there’s nothing you can do about it.”

Today marks seven years since my dad left this world. I can’t say if it feels like more or less than that. What I do know is that it is a painful milestone date, along with many other painful milestone dates that make February a difficult month. I woke up unusually early and Tinker Bell has been at my side. She is very sensitive and attuned to my feelings, and although she is not cuddly or a lap cat, she even crawled and slept on me after I had some recent surgery. I guess she knows that today is one of those sad Mommy days.

I have not moved beyond vivid memories of this day seven years ago. There was a terrible snowstorm and I called the hospice nurse’s station to check on my dad. They said they were about to call me because his status changed. They also let me know that all transportation- trains and taxis, both of which I needed- was stopped due to the snow and I would not be able to get there. In November, I had taken a leave of absence from teaching and spent every single day for a few months with my dad and then, after returning to work in January, traveled to see him every weekend for what unexpectedly turned out to be his last few weeks. Daddy was afraid to die and I was utterly devastated that after being with him almost every day, I couldn’t get to him at this critical time. Although he was not conscious, I asked the nurse to put the phone to his ear. I told him that I loved him, that he was the best dad and that he should go if he was ready, that I would be okay. I knew that would be his worry. I left work to go home and see if, despite the warnings, there was anything I could do to get to the hospice. As I opened the door to the apartment, the phone rang. He died.

For the remainder of the day, I went through motions with phone calls and funeral plans. I wrote notes about my dad for the rabbi, a chaplain from the VA hospice who my dad liked very much and who kindly agreed to perform the service. I cried as I looked at the materials I bought and would not get to use to make my dad Valentine card and birthday cards.

Struggling with my own emotions, I also realized that for Ben, losing my dad was losing the only person who was a true dad to him, but it was also facing the reality of death, which he had been trying to deny as he experienced the progression of his ALS. I remember so clearly how upset Ben was that he couldn’t hug me to comfort me. My dad used to tell me that it troubled him that I was going to lose him and Ben, likely within a short period. It bothered me when he said it, probably because I did not want to think about that future. However, I cannot deny that when I lost my dad, I acknowledged that I could not escape the reality that I would also lose Ben.

It’s ironic that given how much my dad loved dogs, and we were a family that always had a Schnauzer, the quotes that resonate today are from a cat movie! 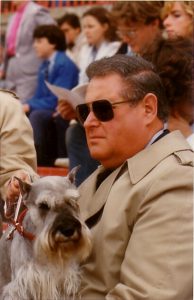 My dad, in one of his favorite photos, with our Miniature Schnauzer, Windy, at my Cornell graduation. Daddy liked to look serious, but he was quite the joker.

“Nobody messes with your dad.” – Mufasa
I was always a Daddy’s girl. I know that I was my dad’s whole world, and I was constantly reminded of that when he was in the hospital and then the hospice. It seems that he spent much time telling anyone who would listen about me. I think that despite the loving aspects of caregiving for a parent, it is hard for any child to essentially take on the role of parent to their parent. Growing up, I firmly believed that no one would ever mess with my dad. He was a Marine! Cancer messed with my dad and I could not protect him. It was difficult to see him struggle with cancer, particularly because he had a very defeatist and negative attitude. It was exhausting to be a constant cheerleader as he counted down to his demise. Fortunately, I did inherit his sense of humor. As an adult, I could reason that this was simply the way he coped with his situation, but the little girl in me said that he was my Daddy- he was supposed to be strong! Ultimately, cancer won, and it was heart-wrenching to watch. In my memories, he will always be the Daddy who protected and loved me with all his heart. Nobody or nothing will ever mess with that.

“He lives in you.”- Rafiki, talking to Simba about Mufasa
“Remember.”- Mufasa
Without a doubt, I see within myself reflections of my dad. I learned so much about love, compassion, respect and patriotism from my dad. Although my dad had so much confidence in me, I also possess his ability to identify (or imagine) obstacles and things to worry about that sometimes hold me back. I try to remind myself that my dad would believe in me.

Caregiving was challenging and at times downright ugly, but what I learned from those experiences and memories is profoundly meaningful and indescribably loving. It also let me see positive things about myself. My dad had complete trust in my ability to take care of and advocate for him. Now, I want to make him proud and to let him know through my actions that he is remembered and loved in every step I take. 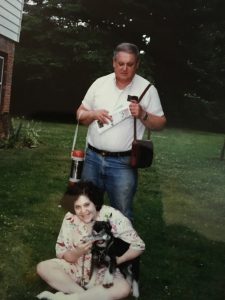 “Whenever you feel alone, just remember that those kings will always be there to guide you and so will I.”- Mufasa
In these days of COVID, I feel especially isolated and alone. Given the state of the world, I imagine the conversations that I would be having with my dad about the tragedy that has befallen this country. I know that he would be devastated by the affronts to our democracy by the thankfully former administration that will sadly leave a lasting stain our country’s history. I miss our phone calls, though I know that he would have been screaming and I believe that it would have made him physically and emotionally ill.

In these and other challenging or puzzling times, I still turn to my Dad for guidance and wisdom. I share some of his wisdom with my students, reminding them that you get more with honey than with vinegar, and that it’s important to be able to laugh at yourself and take a joke. Sometimes, it’s memories of conversations we had that help me to move forward. Sometimes, it helps to know with all my heart that he is watching over me. And sometimes, on days like today, even with all the love and good memories and guidance, the only thought in my head is that I love and miss my Daddy. 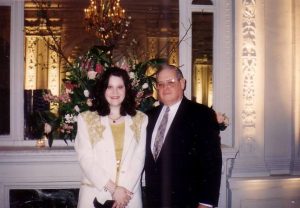 My dad and I

National Hugging Day- When We All Need a Hug Seven Years- Memories, Ironies, Tears and Laughter