Are Your Emotions All TANGLED?

So often I wished I could go back in time to the  pre-ALS and pre-cancer days. Of course, Ben and my dad undoubtedly felt that way, too!  As their caregiver, I had a very hard time finding a balance between time for Ben and my dad and time for myself. I don’t think that I ever did. I didn’t see my friends much, and I was very excited when I was able to go to the theater, ballet or dinner. This could only happen if someone (usually Ben’s daughter) would stay with him. Ben wanted me to do things for myself that made me happy but also hated that he was primarily homebound, which I completely understood. He did not want to have to depend on me, he wanted to be well and independent. We both struggled with guilt and resentment. There were many tangled emotions. I felt just like Rapunzel who was conflicted about wanting to be free but wanting to do what she thought was the right thing and obey her mother (the clip above). I wanted the freedom to have some semblance of a social life, yet I felt completely guilty and nervous about going out. At a restaurant, my phone was on the table in case someone had to reach me. At the theater, intermission was the time I would check my phone, call or text to be sure everyone was okay. I even slept with my phone next to me in case my dad called. At work or during errands, my phone was in my hand or pocket, just in case Ben or my dad needed me.  I enjoyed time on my own, yet I always felt lonely and worried, and I couldn’t keep my thoughts from drifting to how life would ultimately be without them.

Now, too, I have “ups” where I go to a Broadway show or the ballet, or I make plans without having to consider caregiving responsibilities. But those “ups” are followed by such lows that are the grief, and it comes with a sadness that looms over everything.  The role of caregiver comes naturally to me, and despite the stresses, I believe that caring for Ben and my dad was the best and most important thing I have ever done. It meant the world to me when I felt that I’d helped them. I’m floundering now that I do not have to fill that that role, though I will probably always question whether I did the best job I could do. I’m pushing through the lows because, after nearly a year, I know that I need to join the land of the living.  I have begun to want to do things and see my friends. I figure that the joy and stability will come in time if I “just keep swimming, just keep swimming, just keep swimming.” For now, the emotions are still tangled. 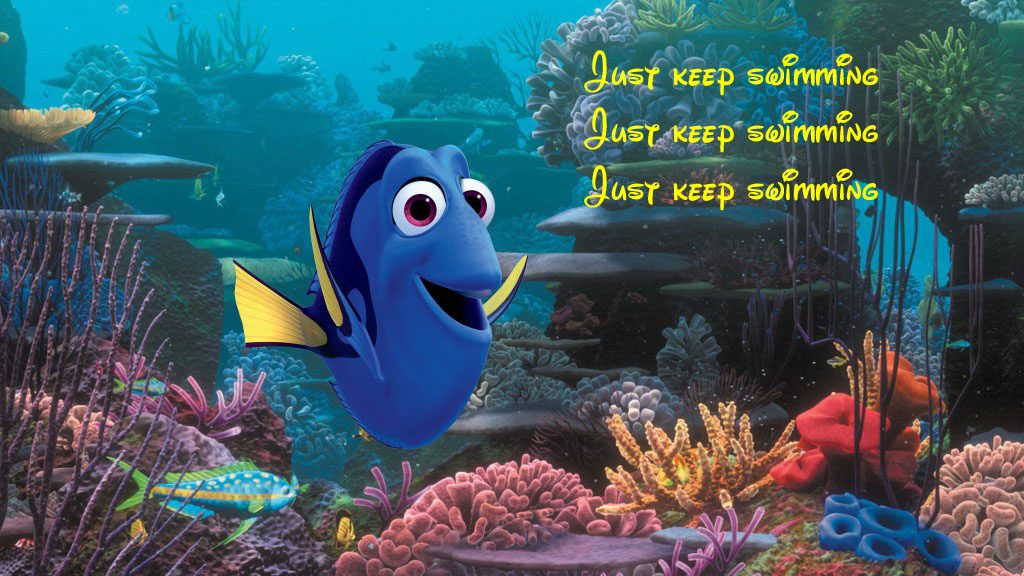