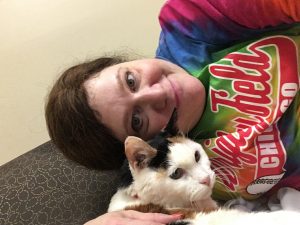 Today is National Respect Your Cat Day. As my grandma used to say about Mother’s Day, in my cat Tinker Bell’s opinion, and mine, EVERY day should be a day to respect your cat! I certainly respect, and love beyond measure, Tinker Bell, as I did Disney, and my first cat, Tiffany. My cats have celebrated my joys and helped me through my most difficult times. I am grateful for any opportunity to honor them. Now, as I “shelter in place” here in NYC during the coronavirus pandemic, I am even more grateful for the company of Tinker Bell and reflective on the significance of pets in my life.

I grew up with dogs- Schnauzers, to be specific- and would have called myself a “dog person,” but when I met Tiffany, my world grew and now I am also a “cat person.” Actually, I am an overall animal lover.

Tiffany, my first cat, was adopted by the organization where I worked because she was going to be brought to a shelter where she would have been euthanized in a given period of time. The managers of the organization were animal lovers, and they also knew that I was grieving the loss of my family’s Schnauzer, Dulcie. Tiffany chose me as her human from the moment she arrived at our office. I was allergic to her, and people had to help me put eyedrops in my eyes, but I took to her as she did to me. What can I say? I got better at eyedrops and Benadryl has become a staple in my cabinet. Tiffany was my assistant at all meetings, and she complained to me when anyone used “her” conference room. If I had been out of the office in the morning, she put on quite a show pretending that she hadn’t eaten, as staff members told me of the treats she had enjoyed. In the summer, when we had Fridays off, I could not imagine leaving her alone for three days. After all, I only knew of dogs and that they could never be left alone for that long. So, every Friday, I went to the office with a yogurt that I shared with Tiffany- she preferred peach and blueberry. I took Tiffany home for holiday weekends, too. As a kind of joke, I put on the movie Born Free and sang the song, inviting her to sing along. Who knew that she would?! And, that whenever she was hiding, if I sang the song, she would come out to me! 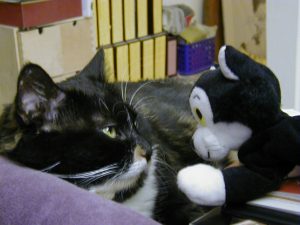 When I did get a new job, it was agreed that Tiffany and I belonged to each other. In Tiffany’s case, I really was the only person she cared about. She was a feisty and funny girl and I used to say that she spent hours thinking of ways to annoy Ben. She was really good at it, hitting him if I wasn’t looking, staring him down until he moved so she could sit next to me. Ben would proudly bring home shrimp for her, but she would only accept it from me. And, my favorite event was one day that I repeatedly overheard Ben arguing for her to stop. I went into the room and Ben complained that she kept closing the door to the entertainment center each time he opened it. I looked at her and she walked away with her confident strut and dismissiveness. Of course, she didn’t get in trouble. I thought it was funny.

Ultimately, Tiffany got mammary cancer. After intensive surgery, within three months, it was back and had spread. I had to say goodbye to her. Ben accompanied me to the vet’s office. Despite her antics, Ben never had a close relationship with a pet until Tiffany, and he loved her very much. On our way home after saying goodbye, Ben broke down. We comforted each other through that grief.

I knew that I needed a new baby, so we welcomed Disney. Ben had a bit of a hard time fully embracing Disney because he missed Tiffany so much. However, much to my delight, Disney was the sweetest and  cuddliest cat I ever met, so she won him over pretty quickly. I probably compared her to Tiffany a little too much, but since Tiffany was not a cuddly girl, I did enjoy that Disney loved to be held and hugged. She helped me cope with the loss of my Tiffany. Little did I know that Disney would also help me to cope with the loss of Ben. Also, that she would help me to realize how important caregiving is in my life. 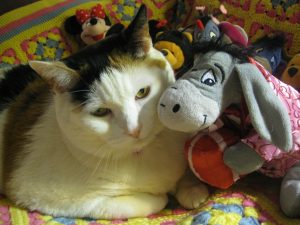 Disney was Miss February in a Bideawee Calendar!

After Ben was diagnosed with ALS, Disney witnessed and experienced Ben’s battle along with me. When he became homebound, she kept him company. She accommodated his desire to pet her by jumping on the arm of the sofa or on the bed. It was easy to see her concern as he had more difficulty navigating the space. Unlike many cats who are more territorial, Disney seemed to know that there was a reason for all of the changes in our apartment. Furniture was moved, things were stacked, her favorite corners were no longer available, but Disney handled it so graciously. She was there for me when I needed her, too. She sensed if I was crying or frustrated and was always at my side at those moments.

When Ben was in the hospice unit at Mount Sinai Medical Center, I was allowed to bring Disney to visit him. She was on thyroid meds and suffering from arthritis, so at first, she was not comfortable on the bed with him. She sat on a chair and watched him intently. When he asked me to bring her closer so he could stroke her, I put her on my lap and she pulled herself up on the bed, curling up on his chest. He asked me to put his hand on her, she turned on her side, and they both closed their eyes. I truly believe that they said their goodbyes in this moment. 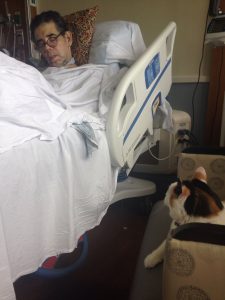 Disney did not realize that she was the comfort that Ben and I needed after we lost Tiffany. She also became the comfort I needed after the loss of Ben. The apartment was so lonely and there was no more structure to my day without my hours spent at the hospital. I don’t know what I would have done without Disney’s sweet face and presence.

Unfortunately, only a couple of weeks after I lost Ben, I noticed some physical problems with Disney, and I took her to the vet. It tuned out that she had diabetes and I had to inject her with insulin twice a day. Just as I had to do as Ben battled ALS, I had to put aside my squeamish nature. Once again, I was a caregiver, this time for Disney. We had several emergency visits to the vet, including one in the middle of the night, when I genuinely thought I would lose her. Terrifying as it was, it was this incident that showed me that I truly am a caregiver at heart. (You can read a little more about my experiences with Disney by clicking here) It is my strength and my fulfillment despite the challenges and sadness. Administering fluids was the next phase of Disney’s illness and although it took me a while to learn how to do it without pricking her, she handled it so well. I promised Disney and myself that I would never keep her here if she was not having a good quality of life. Eventually, I was by her side as I let her go. It was particularly difficult to let go of Disney because she was my closest connection to Ben. She may not have been able to articulate her feelings, but she saw, felt and responded to his ALS struggle and its effects on our family.

I was very excited to tell Marie that she was Disney’s favorite actress!

I knew that I could not be alone for long. Within a couple of weeks, I welcomed a new little love. Tiffany and Disney were more than eight years old when I met them, but this little girl was only two. She was half the size of them, which, in my way of thinking, was fairy-sized, so I named her Tinker Bell. She has a lot of kitten in her and it delights me to watch her run around and play with her toys. Over the past year that she’s been here, she has become much more affectionate and she is very chatty. She still does not like to be held but insists on sleeping pressed up against me. Her greatest joy is knowing that I am staying home with her, so the current mandate to stay at home is a dream come true for her. I’m glad she doesn’t understand the news. Still, I can talk to her about my worries and enjoy having her companionship. I know she thinks she’s training me well, but I love making her happy. 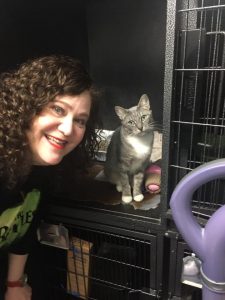 People who don’t love pets do not understand that my pets are family.  Today is Respect Your Cat day, and I am happy to recount these many reasons that I respect, and treasure, my cats and all that they have brought to my life. 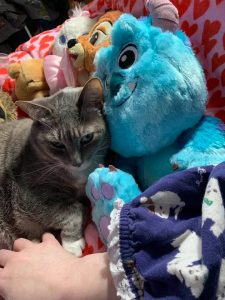 At home on the sofa with Mommy is Tinker Bell’s upside to the coronavirus pandemic! She loves her friends Sully, Bambi, Marie and Pooh, too!