Sometimes the Right Path is not the Easiest one 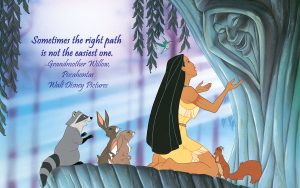 It wasn’t a matter of choosing to be a caregiver.  My dad was elderly and was diagnosed with cancer. Shortly thereafter, Ben was diagnosed with ALS. I loved them and I wanted to be there for them, so, of course, I was their caregiver. I didn’t think about the implications of caregiving as their illnesses progressed, since things were too chaotic in the present!  I look back now and indeed, it was crazy. I was working full-time as a teacher, running home after school and caring for Ben, and talking to my dad several times a day to encourage him to eat, listen to his worries and follow up with his doctors. I used personal days to accompany them to doctor appointments. On weekends I took care of Ben and also traveled by train to visit my dad and do his shopping. I didn’t take care of myself, which was apparent to everyone and to me. As Grandmother Willow from Walt Disney Pictures’ “Pocahontas” said, “Sometimes the right path is not the easiest one.”

I’ve remarked in other posts that Ben was incredibly brave and determined to stay independent for as long as possible, and since I felt that this attitude was helping him to stay in fairly good shape, I followed his lead and let him try to ignore what was happening to him. I believed then, and still do, that the right path was the one that let Ben deal with his ALS in his own way. For him, it meant that we went from crisis to crisis without a plan. It wasn’t easy for either of us.

When my dad was in the hospital and then in the hospice, I took family leave and traveled a few hours every day to see him. Fortunately, at that point Ben was fairly comfortable being alone, and he could contact me if he needed anything. We had a back-up plan with a couple of friends and one of his daughters. I do vividly remember one instance of being with my dad while texting and calling two friends to coordinate their going to our apartment to help Ben. At times like that, a sense of humor was as imperative as crisis management skills!

As his ALS progressed, Ben did not want to admit that he needed more care than I alone could provide. I knew that I was starting to fall apart from the pressure of juggling full-time teaching with full-time caregiving, and then, grieving the loss of my dad, who passed away after a couple of months in hospice. I didn’t think I had any options. This was the path Ben chose and I chose to join and support him on this awful journey. Ben depended on me. I saw how he struggled physically and emotionally with ALS and could not bring myself to pursue difficult discussions with him about his increasing need for more care and what I considered to be a selfish concern for myself in light of what he was facing. And, to talk of the future meant thinking about nursing homes, tracheostomies, feeding tubes, depleted savings and death. For me, it also meant thinking about life without him.

Like anyone who needs private care, we were worried about expenses because we worried about what we would need to do in the future. The progression of ALS is very unpredictable. But, when Ben became uncomfortable being alone, we did hire a caregiver for a few hours a day during the week. I woke up early to get Ben situated and he was alone for a short time until the aide arrived and then for a couple of hours until I got home.  However, there were days that public transportation was delayed and he was alone longer than anticipated. Those were times of panic for both of us, and we were lucky that nothing ever happened. On some days I had to stay home because the caregiver was unable to come to work. Or, if Ben was not well during the night I was afraid to leave him alone at all and frankly, too exhausted to drag myself to work. My days at work were spent with my cell phone in my hand or pocket, just in case. It wasn’t good, it wasn’t easy, and there was not even time to think about if it was right, or exactly what to do to make it better.

Weekends are usually for rest and relaxation, but not for caregivers, or for the people who need their care. Ben looked forward to weekends because I would be with him, and I understood and appreciated that, but I felt isolated, stressed, overtired, and, when he was demanding and critical, I felt unappreciated and incompetent. The lifting and transferring also took a physical toll on me. His struggle with all daily life activities took an emotional toll on both of us. Ben was fairly homebound because our apartment was not accessible, but he wanted to go outside and enjoy the sunshine. Our relationship had shifted to patient and caregiver, and we were both frustrated, resentful and depressed. It was not a good situation but we loved each other so we pushed past, or tried to ignore, the rough patches. There were many times when I questioned if this was the right path, but we were somehow paralyzed. To change course on our path would have meant considering a nursing home, and we did not like that option.

The critical juncture in Ben’s path occurred when a respiratory problem landed him in the emergency room of Mount Sinai Medical Center in NYC, and he was admitted to the hospital. As fate would have it, and maybe as a sign that this difficult path was the right one, this happened just after the school year ended, and I was able to be at his side every day and frequently overnight. He chose to get a tracheostomy and a feeding tube. Of course, this was traumatic, and Ben could no longer speak or eat and was fully dependent on a ventilator. For both of us it was a difficult period of adjustment and reflection.

The ALS journey is never an easy one, and, after several weeks in the hospital, the path Ben chose led him to Mount Sinai’s wonderful Hertzberg Palliative Care Institute, where he received compassionate and wonderful care and he left this world with dignity, surrounded by love and music and even his favorite Disney decorations. And that, though definitely not easy, was right.