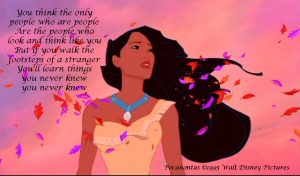 Lyrics from the song “Colors of the Wind” from the Disney film, Pocahontas”
Lyrics by Stephen Schwartz and Composer Alan Menken

These lyrics are from the song Colors of the Wind from Pocahontas. In the context of the film, the song relates to people learning to accept and open their minds to people of other cultures and races. I found myself thinking of the many people we may judge without really knowing them, their stories, and what it is like to be in their lives. I think about the way people responded to the way Ben chose to live and die with ALS. It is easy to have opinions, and it’s fine to have them. I have them, too. We were fortunate to have many people close to us who put aside their opinions to create a solid support network. But, there is a line that is crossed when opinions become harsh judgments that are made without full knowledge of a situation, and, more importantly, without an attempt to see a situation through a different lens and get a glimpse at what it is to “walk the footsteps” of another.

When Ben was first diagnosed, suggestions were offered by his ALS team, who had followed many people on the sad and excruciating journey of this disease. There were opinions from our friends and family. I had my own thoughts. But, Ben had to choose his own path. No one could really know exactly how he felt about facing the loss of his abilities and, in essence, his freedom, as he faced death. I lived with him every single day and talked to him about these things, trying to walk his footsteps, and I still could not truly envision what it was like to be him.  Still, there was a lot of “what you should do” and “what you have to do” from people who had much to say, yet did not ask Ben (or me) questions that would have given them insight into his experience and allowed them to acknowledge and comfort him, rather than simply judge and direct him.

Shortly after his diagnosis, Ben told me that he would understand if I wanted to leave him, if I could not handle what was happening to him and if I wanted to have a different life. From his perspective, he loved me and wanted the best for me, at the same time that he feared and wanted to prepare for the possibility that I might leave him. Indeed, some people told me that I should leave him.  To walk in my shoes would mean that you perceived my overwhelming fear, anger and sadness but knew that I would never leave this man whom I loved and who needed me.  And, to walk in my shoes would mean that you would realize that even when he was harsh and unkind, I would either defend it because of his illness, or believe him and think that I must not be a very good caregiver, or feel helpless because he was a dying man and I was devoted to him.

There were many times throughout Ben’s illness that I would have liked to tell people – strangers and those close to us – to try to walk in our footsteps.  At Walt Disney World, when Ben did not have visible signs of disability in the early stages of ALS, some guests treated him as if he was simply lazy by using a scooter, and were clearly annoyed when loading the scooter delayed a bus and when it took up seating space. Instead of being defensive and angry, we were anxious and unnecessarily apologetic for the delays. That said, there were many people who also offered assistance if they saw me helping him to stand or transfer from the wheelchair, and they were kind and good humored with Ben. Try walking in the footsteps of someone who does not have the freedom to easily step on and off a bus and has to awkwardly and anxiously enter and secure a wheelchair while being watched impatiently by other riders. Imagine knowing that this is only the first of the abilities that you will lose and that this may be the last time you will ever be able to travel. We never know the big picture behind what we are seeing, so it is important to suspend snap judgments.  Ironically, though there are often controversies regarding visitors to Walt Disney World who illegitimately request disability passes to get to the front of the lines, Ben never wanted special treatment or to take advantage of having a special pass for the attractions. I must also add that the Disney cast members on the grounds and transportation were always fantastic.

There were many instances in which people bypassed Ben and only addressed me. When his speech became impaired, he joked that if they heard him speak they assumed he was somehow mentally challenged, and, although it did bother us, I was glad that he had a good sense of humor.  However, I was quick to involve Ben in conversations, because I wanted people to know that he was fully capable of communicating and understanding, even if he needed my help. Then, some people realized that they could engage with Ben. Think about how it must feel to be ignored when you are vibrant, able and wanting to be a part of a world that is becoming increasingly distant. Just acknowledging someone’s presence with just a smile can lift a person’s spirits. It certainly lifted mine to see him respected and happy. Compassion goes a long way.

Seeing things through another’s perspective is not always easy, especially when you are dealing with someone who has a terminal illness, like ALS. Among my biggest frustrations was that some of the people with the strongest opinions, arguments and accusations were also the people who were not actively or consistently involved in Ben’s care. They promised to visit and did not. They did not try to gain a clear picture of his medical and emotional situation and dilemmas or ask how they could help, but they were vocal with their criticism, even if completely unfounded. Instead of walking in his footsteps, they stepped on his feet and tripped me up with the unnecessary drama they created. It is imperative to be honest with yourself about the role you have had in someone’s care and life, and to recognize when to put aside your own needs and agendas, in order to watch and listen, and to “learn things you never knew you never knew.” With that insight and knowledge, you are more able to play a meaningful part in someone else’s journey.

In Ben’s fifth year with the disease, he made the choice to proceed with plans to get a feeding tube but those plans were interrupted by an urgent respiratory crisis that landed us in the emergency room. Then, admitted to the hospital with a biPAP mask and being fed intravenously, he had to decide for sure if he wanted a feeding tube and a tracheostomy. It took him more than two weeks to make that decision. I held his hand, I tried to answer his questions and to get a sense of what he was feeling, but I could not tell him what to do. I was worried about what his quality of life would be in a skilled nursing facility, which was where he would have to go with a tracheostomy. However, talking to him helped me to understand that Ben was focused on living and the things that he would be able to do. I could not begin to imagine all he was experiencing, but talking to him helped me to see his viewpoint and gain insight into his thoughts. I embraced his beliefs and supported him.

Ben did decide to get the feeding tube and tracheostomy, but things did not go smoothly in the hospital. He quickly developed an infection and then pneumonia. He was miserable. After a few weeks, he made the decision to go to the hospice unit of the hospital and to be removed from the ventilator, which was his life support.

Life and death decisions can be debated based on a range of convictions, from emotional to clinical to religious. Ben navigated his journey with ALS in a way that was right for him. I respected that and I admired his bravery. I had to see his situation through his eyes, and although I did agree with him, I understood that agreement with him was not the issue. I was there for him. Whether you are a caregiver, friend, family member or even a patient, it is so important to try to walk someone else’s footsteps. Maybe I did not handle being a caregiver the way some people thought I should and maybe I did. Maybe Ben did not navigate his life with ALS the way some people thought he should, and maybe he did. Keeping an open mind, even if we do not agree, helps us to “paint with all the colors of the wind” and support each other with a more positive, meaningful, loving and helpful connection.