Our Anniversary and Finding the Pixie Dust

Thursday was Ben’s and my anniversary. The third anniversary without Ben. I missed him, as I do every single day, but probably more on these milestone days of our relationship. It’s taken me a couple of days to write this because I’ve felt so many emotions and thoughts about my feelings that I could not quite put on paper.

This year, our anniversary fell during spring break from school. It would have been a great excuse for us to go away. After Ben left, it became a good excuse to stay home with my emotions and reflect, looking at our zillions of photos and videos and listening to music that made me feel like he was here. Well, he is, just in a different way.

For many years, I have wanted to see the cherry blossoms in Washington, DC. I grew up with, and was very attached to, a beautiful cherry blossom tree outside of my bedroom window and I have always loved those trees. I wanted Ben to see Washington, DC, too. He would have loved the Smithsonian and all the monuments. We never made it there. This year, peak cherry blossom bloom was expected to fall during this week and I wanted to see it. I struggled with whether I should go to DC if it was a place Ben would have liked and yet we never went there together, particularly during the time of our anniversary. Should I allow myself to enjoy it without him?

I find that making plans is harder without Ben, but this dilemma made it even harder. Since I’m planning just for myself, I have a hard time committing to arrangements. I had the same problem when I took my trip to London. I looked and looked at hotels, I checked and rechecked the Amtrak schedules. I could not make and stick with a decision. It bothers me because before I met Ben, I was a very independent and frequent, albeit nervous, traveler. Even when Ben and I were together, I occasionally traveled by myself or with a friend. Now, I find that my enthusiasm about traveling and visiting friends is tinged with a feeling of loneliness. But, I push myself and I think that Ben would be proud of me because he wanted me to be more confident. And, since he is in my every thought, he is with me.

As it turned out, the best day to travel down to DC was on Wednesday, which meant returning on Thursday, our anniversary. I was nervous about that because I didn’t know how I would feel on that day. I knew that it would be strange and sad to go without him, as it always is, but I was also unnerved by the timing. I stuck with the plan, thinking that being on a train would be a good thing because it was something that made Ben very happy and something that always took us to a place we enjoyed. My Amtrak memories are mostly of Ben and how he loved the train. He knew the ins and outs of Penn Station and how to get to the right track the fastest way. I got a little tense in the crowds and he always kept me calm.

I kept frequent tabs on the cherry blossom watch web site, which predicted peak bloom for the weekend after I was going to visit. The reports also predicted some nasty weather during my visit which could have damaged the fragile cherry blossoms. I endlessly debated with myself whether I should cancel my trip. I had lunch plans with a good friend, Ellen, for Wednesday, and I was looking forward to that. It also gave me a sense of commitment to making the journey. I stuck with my plan and headed to Washington, DC, wishing that the weather would cooperate.

On the train, I repeatedly checked the weather reports and the cherry blossom watch. The reports of terrible storms and wind seemed to diminish, and the cherry blossom watch forecasters actually shifted their predicted date of peak bloom to Thursday! At times like that, I truly believe that Ben, along with my dad, mom, and grandma, are watching over me and sprinkling some pixie dust. With the exception of a brief shower just after I arrived, Wednesday turned out to be a sunny but windy day, and I hoped not too windy for the fragile cherry blossoms. I thought it was so sweet that any time I mentioned the cherry blossoms, people smiled at how beautiful they are. I had a lovely lunch and caught up with Ellen. I talked about Ben, too, which keeps him close. Though it’s been many years, I’ve been to DC many times, but this time I walked the streets and saw the sights through Ben’s eyes, making mental notes of how he would react to different scenes and places. It’s a combination of lonely yet comforting.

After lunch, I went to the National Portrait Gallery to see the Obama portraits, which was a very emotional experience. Suffice it to say that it was beautiful to see people of all ages and ethnic groups feeling such pride and excitement to have their photographs taken with those portraits, myself included. In the evening I went to the Kennedy Center to see a dance performance. Ben would have been pleased to miss that. I had to chuckle to myself as I thought that even I might have been happy to have missed it! Although keenly aware of being by myself, I had little conversations in my head with Ben and I was elated to be at the Kennedy Center. It was not until I arrived at my hotel room that the alone-ness set in. 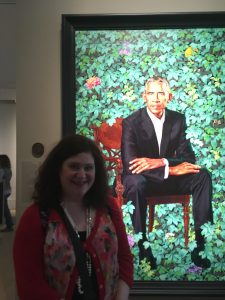 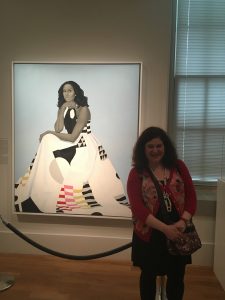 When Ben proposed he asked me to be his Minnie, and he would be my Mickey, so on Thursday, I woke up and said, “Happy anniversary, my Mickey!” I plotted my route on the Tidal Basin, as if I was sharing it with Ben, which quelled the loneliness and let me feel that we were going there together. I don’t live in denial of my loss, but I feel his presence, if not literally, deeply in my heart.

The weather was cooperating, and it was expected to be the peak bloom day for the cherry blossoms. That was more than I could have asked for, and I cannot help but believe that Ben somehow made it happen. I headed towards the Tidal Basin, intent on paying my respects at the various monuments, which is something my dad would have appreciated, and Ben would have loved to do. I started at the World War II memorial. It was very impressive and peaceful, and it brought back loving memories of how much my dad loved to read about World War II and how he loved films like Mrs. Miniver. Also, how Ben looked for any documentaries about World War II that my dad might like and how they talked about the war and history. 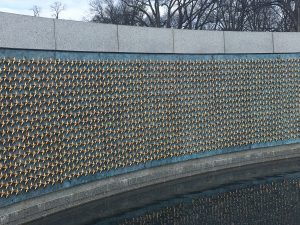 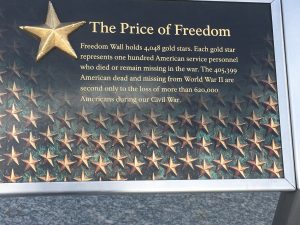 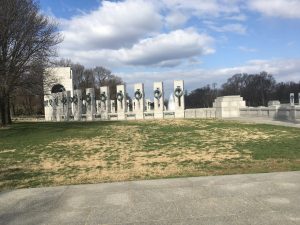 My dad was in the USMC during the Korean War, so that memorial was especially important to me and it brought tears to my eyes to think of how my dad would have reacted to it. My dad was such a proud Marine and thinking about how I would have been calling him from DC to talk to him about the monuments made me cry. Sometimes, keeping people in my heart just is not enough. 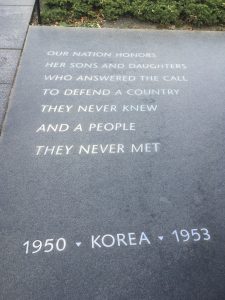 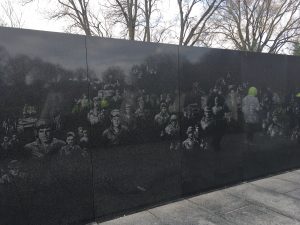 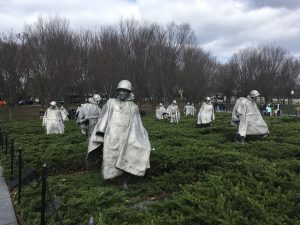 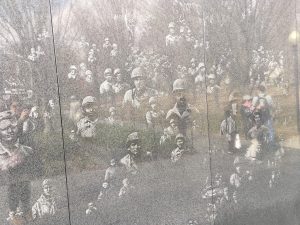 When I got to the very impressive Martin Luther King, Jr. monument and read his powerful messages which are carved into stone, I also got the first glimpse of the Tidal Basin and all the cherry blossom trees. It was overwhelming to me. 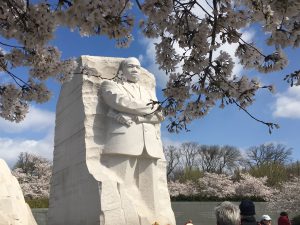 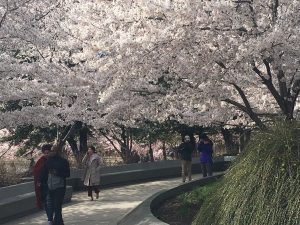 This was my first glimpse at the path along the Tidal Basin. I had to capture it on film. For me, it was like stepping into a fantasy. 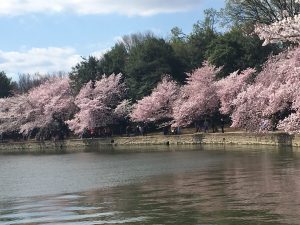 I originally thought that I would also visit some part of the Smithsonian during my visit. However, I found myself completely entranced by the cherry blossoms. I spent four hours walking and thinking and reflecting. There were tears and smiles. I offered to take photos of people and they reciprocated, as we shared our delight in the beauty of the scenery.  I thought about Ben and how it would have been so romantic to be together in this setting for our anniversary. I reflected on our relationship, pre- and post-ALS. I thought about my dad, too, and how he instilled in me a strong sense of patriotism. I remembered how Ben and I called him when we had history questions or current events concerns, knowing that we were going to be on the phone for at least an hour-long history lesson. Daddy knew so much about history but also about the military, and he had a great understanding of politics within historic and military contexts. I recognized that the strong pains of loss and grief are reflections of the tremendous love and joy I feel for Ben and my dad. Although the waves of grief hurt, I am so grateful for those relationships. I thanked them for this dream come true of a day surrounded by the most magnificent and delightful cherry blossoms. 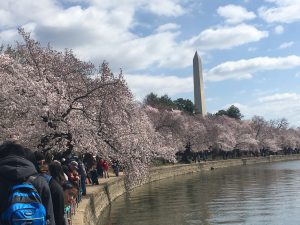 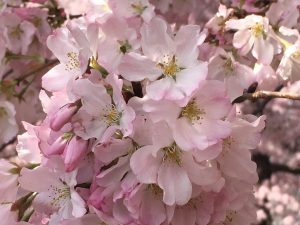 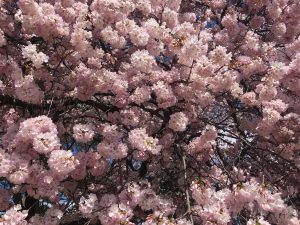 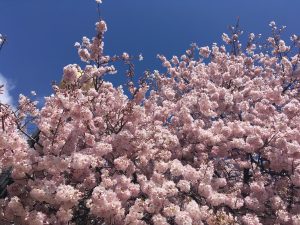 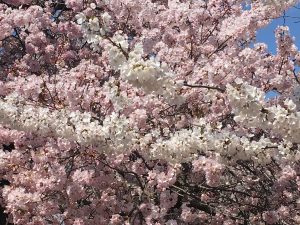 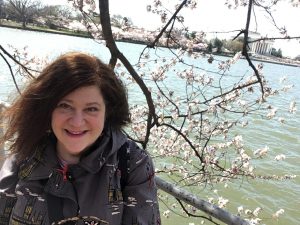 I have to share the following three photos of a lovely magnolia tree.I always love to see them, remembering the beautiful magnolia tree that stood in the front of my childhood home. The colors were magnificent. 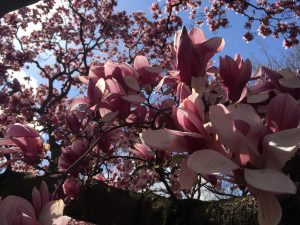 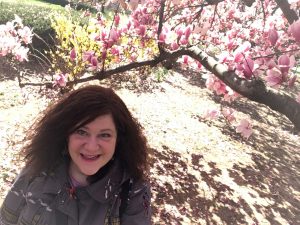 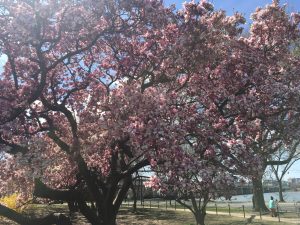 On the train back to New York, I thought about how nice it would have been to be taking the ride with Ben. I wondered if it was selfish to see the cherry blossoms on our anniversary. Should I have more intentionally grieved by not doing anything? Will I always have these conflicts? I don’t have the answers. People tell me that Ben would want me to be happy. I like to think so and I believe that I know so. But, I don’t ever want to take that for granted or to take advantage of that. I want to know in my heart that I consider Ben in my choices and decisions. Thursday was my anniversary and I never lost sight of that. It’s not a comfortable feeling yet, and I am still adjusting to being on my own, but I feel like my trip to DC allowed me to live in the present but incorporate and honor my loving memories. The pixie dust is knowing that, as the song from Bambi says, Love is a Song That Never Ends.