Pinocchio was released on February 7, 1940. I do love this story of the mischievous little puppet who just wants to be a real boy. For me, so much of the film is about the song lyrics. They took on a special meaning when I was a caregiver and they continue to touch my heart.

When times are hard during caregiving, whether it is in the role of caregiving itself or in watching your caree struggle, it is easy to wish, as Pinocchio did:

There were times when I just wanted to stroll home instead of rushing to tend to Ben, or go to dinner with a friend, or watch tv without an interruption. For me, much stress came when Ben was feeling frustrated and took it out on me by being critical and difficult. Ben did not want to accept that he needed more care than I alone could provide. He did not want to admit that he was afraid to stay alone. I did not know how to approach him about the fact that he needed more care. I didn’t want to disappoint him and yet I was upset because his expectations were unrealistic. I was upset with myself for rarely standing up for myself. Frustration was perfectly understandable on both of our parts.

The truth was that I was attached not by puppet strings, but by my heartstrings. When I did have some time to myself, Ben was pretty much the only thing on my mind. If I went out, I constantly texted him to see if everything was ok, even when someone was with him. I knew he was most comfortable with me and I was most comfortable when I was there.

When he did finally agree to get a home health aide, we had our routines for when they would update me. I had my phone with me at all times waiting for his text telling me that he was awake and seated at his computer. Even when he was in the hospital, and I knew he had constant medical attention, I felt the need to be there. After all, he could not even move his hand to use a call button. The strings that attached us were unbreakable.

I had a lot of support from friends, his medical care team and some family. Of course, they were concerned about Ben, but they were also concerned about me and that I was running myself ragged. I know the philosophy that if you don’t take care of yourself, you can’t take care of anyone else. But, it was impossible for me to prioritize myself knowing that Ben had ALS and it was progressing, and knowing that he could not help needing assistance. In the back of my mind, he was dying, so while he was here I had to do anything to help, advocate for and entertain him.

There are also certain realities that affected caregiving. Insurance does not cover home health aides. Since ALS is a disease that does not have a predictable progression, even when he admitted to needing help, he was afraid that he would completely deplete his savings. These are such stressful situations to deal with in the midst of dealing with the physical and emotional impact of the disease. It is tragic that better care and attention is not given to circumstances such as these and to supporting caregivers and carees. I could devote many blogs to that subject!

So many people told me that I simply had to tell Ben that I could not care for him anymore, or that he could not stay in the apartment anymore, or that he had to begin to pay for care. People are very good at giving advice. And, in my experience, they really do mean well. Interestingly, they don’t always follow the advice they give. Some people who told me to take a hard line with Ben have then found themselves in caregiving situations where they were also towing the line without support and with unrealistic expectations from their caree and others.

In grief, people have also told me what I “should do.” Again, they mean well. Some people think that blogging and pursuing opportunities to support other caregivers has kept me in the past. I disagree. I feel it is important, and even responsible, and it is also rewarding. It allows me to take my experiences and use them positively as I move forward. But, no one should really have to defend themselves. I say this here because, as caregivers, and then in grief, we all have to step back into life and redefine ourselves, and maybe my own experience will give other caregivers food for thought.  The bottom line is that we all know in our hearts what we have to do because our consciences are our guides. We can request and get advice, but only we know ourselves and our circumstances. And, until you walk in someone else’s shoes, you cannot clearly judge them. This applies to caregivers and to carees.

Jiminy Cricket was so right when he said, “Always let your conscience be your guide.” I had to do what I felt was right for Ben. I hope that I’ve come out of the experience with a stronger ability to communicate my feelings, but I still would not have changed my actions. Although I always worried that I was not a good enough caregiver, particularly when Ben was in bad spirits and critical of me, I let my conscience be my guide. I look back and am grateful that, in the end, Ben was able to stay at home with me until he went into the hospital, and I was at his side until the very moment when he left this world.

As I wrote in a previous post, I still believe in making wishes, and I love the song “When You Wish Upon a Star.” I wished that Ben would find peace and I do believe that he is now in a place where he can walk and talk and eat and play his musical instruments. I wish for a cure for ALS. Whenever I see a fountain, I toss a coin to wish for a cure for ALS. I will continue to wish until it comes true because, as the song goes: 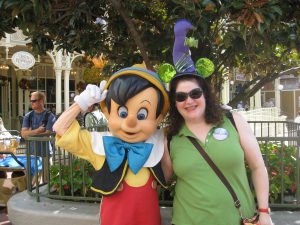