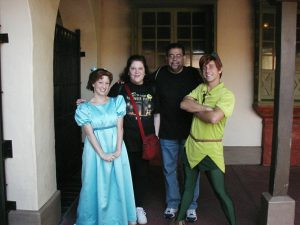 February is a difficult month for me. My dad’s birthday and date of his death, Ben’s birthday, the anniversary of my grandma’s death. A lot of milestones within a short period of time. Think happy thoughts. It’s not always easy when I’m feeling down, but it’s also important and helpful for me to remember the good times, even if it makes me cry. Thank you, Peter Pan, for the good advice.

Think happy thoughts took on a whole new meaning when Ben was struggling with ALS and I was struggling with caregiving. ALS is known to be a very isolating disease. I’m sure that even when he was not literally alone, Ben felt isolated. I felt so helpless when Ben hurt because sometimes, it was so hard to speak to explain himself and be understood, that he just shook his head and stopped trying. Also, with every day came the dread of what ability he would lose. Sometimes he simply had a bad day and other times there was an obvious change in his health. There were days when I was able to care for him without any problems, but then there were the days when it was exhausting and overwhelming, and if I was having back issues, it was physically painful. We cannot walk in the shoes of our loved ones, we can only love them. Love is a lot. Thinking happy thoughts is a lot, too, because, along with love, it lets us remember who we were and what was important before illness changed things. When facing a terminal disease, the unhappy thoughts come easily. The happy thoughts seem surreal, and yet, they let us escape and remember. For us, happy thoughts almost always included memories of our visits to Walt Disney World. Ben spent so much time every day looking at the videos and photos from our visits to Walt Disney World. We loved to listen to the music from the parks, too. He went on their vacation planning web site to plan fantasy trips. I liked to see him planning because I felt it kept his head in living and focusing on what he could do. I truly believe that helped him manage the disease pretty well for about four years.

On those very difficult days when eating was a challenge, or there was a fall, or some other accident, or even just a lack of energy to transfer or be transferred, we had to remember, “All you need is faith, trust and a little pixie dust!”So much happens with illnesses and caregiving that is unpredictable and beyond our control. For me to maintain a certain state of calm that allowed me to be a problem solver, I needed to have faith and trust that things would ultimately be okay. The pixie dust was the whimsy that always let my inner child thrive in the midst of very grown-up, complex circumstances. Sometimes it was just a loving moment between Ben and me that would make us laugh. Sometimes it came from friends, sometimes it came from caring strangers, and sometimes it came from both of us taking a moment to remember the good and loving times. And, with faith, trust and pixie dust, we even made it back to Walt Disney World four times during his illness.

I named my blog Pixie Dust For Caregivers because quotes like this, as well as many Disney characters, films, lyrics and attractions from the Parks were the pixie dust that gave me perspective, inspiration, and comfort during the caregiving years and as I have been working through grief and rebuilding my life. They helped Ben, too. At times, they simply gave us much needed entertainment.

A line in the song “You Can Fly,” is, “Think of all the joy you’ll find when you leave the world behind and bid your cares goodbye.”  I wanted Ben to have peace and to feel comfort he had not felt in the nearly six years he bravely battled ALS. Tragically, ALS was not going away. He was not going to get better. He was miserable after he got his tracheostomy and feeding tube, and he made the decision to be removed from the ventilator. He was ready to leave the world. I am still glad that he was able to make that decision for himself. My own emotions were all over the place- devastation that I was going to lose him in just a few days, along with relief that he would indeed, leave his cares behind and be free from the physical and emotional pain and constraints of the disease that rendered him unable to breathe on his own, speak, eat or walk.

Peter Pan said, “To die would be an awfully big adventure.” I don’t know that Ben would have called ALS an adventure, but it was a journey. A very difficult journey that he navigated with much bravery. Now, I put faith, trust and pixie dust in the belief that Ben has “bid his cares goodbye” and he is in a peaceful place where he can walk and run and eat and talk and sing and use his hands to use the computer and play his instruments. That gives me peace.