What Luca Shows Us About Love and Acceptance 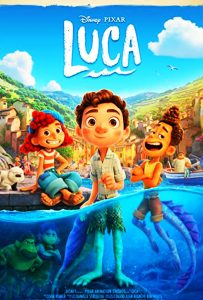 Ordinarily, my posts look through a Disney-colored lens at my experiences as a caregiver and through grief. When I watched Luca on Disney+, it touched my heart in a different but still relevant way, and I felt compelled to write about it. Luca is the story of a young sea monster who is intrigued by the human world and like most pre-teens, he is starting to challenge his parents’ views and attempts to shelter him. Luca’s parents fear the human world and are willing to send him to the depths of the sea to protect him. To rebel, he befriends and runs away with another young sea monster, Alberto, and Luca seems to admire his independence and confidence. What Luca does not know is that Alberto is actually a lonely sea monster who has been raising himself because his father abandoned him.

Luca and Alberto learn that when they are out of the water and dry, they appear to be human. Despite his parents’ warnings, Luca joins Alberto to explore a nearby village on the Italian Riviera, where they conceal their identities, afraid to be discovered because it is a village of active sea monster hunters and villagers who are terrified of sea monsters. In fact, one of the sea monster hunters is the father of Giulia, a girl who also struggles with her identity, who becomes their friend without knowing that they are sea monsters.

Luca’s parents are determined to find him and bring him home. They are as afraid of humans as the humans are of sea monsters. However, their love for Luca leads them to shed their scales and don human forms as they search for him in the village.

After a series of adventures and mishaps, Alberto gets drenched and is revealed to be a sea monster. Rather than defend his friend and show his own sea monster self, Luca pretends to be shocked and Alberto, feeling rejected and hurt, returns alone to the water. Shortly after that, Giulia discovers Luca’s identity. She grapples with the realization that Luca and Alberto are not what she has grown up to believe are sea monsters.

In a revealing conversation, the children find what unites them:
Giulia: You know, we underdogs have to look out for each other, right?
Alberto: What’s, “under the dog’s”?
Giulia: Under-dogs. You know, kids who are different. Dressed weird, or a little sweatier than average.

Without wanting to give away the ending of the film, the film touched me in the way it portrays people who are different. I read in various Disney social media groups that there were people who appreciated the film because they believed it portrayed a gay relationship between the two boys. Of course, there were those who agreed and those who were offended. There were those who found it ridiculous to look for things in a film. For me, what is most important and valuable is that someone watching Luca related to it and felt embraced, validated and understood, that’s all that really matters. The messages I have found in Disney films, whether or not anyone else saw them, are my pixie dust.

I believe that the film showed an overall acceptance of people whom you may see as different. There are people with physical disabilities whose vibrant personalities and intelligence are overlooked. I have written countless times about how Ben was judged because of the speech impairment that resulted as ALS affected his muscles. He was, at times, harshly judged as lazy for being in a scooter at Walt Disney World because his physical weakness was not apparent. There are people with illnesses that are chronic and are not apparent. They are judged for behaviors simply because they are not understood. All these individuals might lack the scales of a sea monster, but they should be seen beyond superficial physical observations. The way I saw Luca, their beautiful and colorful scales made them unique and delightful in their own way. It was the perceptions of others that were ugly and terrifying. Click To Tweet

Luca’s parents have to let him be who he is. That is not easy for any parent or caregiver. Luca’s grandmother points out that, “Some people, they’ll never accept him. But some will and he seems to find the good ones.” We can only hope that there will be more and more good ones as films like Luca will help to open the eyes and hearts.

Luca is a validating film of acceptance and personal growth. It confirmed for me how powerful films can be in helping us to sort through experiences and broaden our lives. It is also delightful to watch, with its added bonus of Italian language and songs.