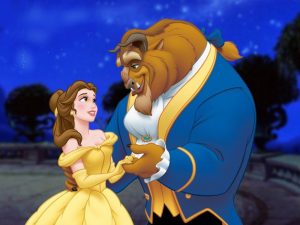 Today is the 25th anniversary of the release of Walt Disney Pictures’ Beauty and the Beast, one of my all-time favorite films. I am reminded of the 2012 release of the 3D version of the film. Ben and I had made a tradition of attending opening days of the Disney movies. As his ALS progressed and getting out and about was more difficult, we could not maintain the tradition, but we did continue to see the films. Ben knew that I was eagerly awaiting Beauty and the Beast 3D because I couldn’t even imagine how they could make it more beautiful (they did.) I did not mention going on opening day and I thought it would be too exhausting and complicated to get him dressed and down the stairs after a day of work. That release date was also the anniversary of the passing of my mom, and I was not in the best frame of mind. No problem. We’d see it at some point. When I got home, Ben was waiting for me, all ready to go. It touched my heart more than I can express in writing. His dexterity and motor skills were already compromised, and it took him all day to get dressed, but he wanted to have our date night. And, because my mom and I shared a love of Disney, he thought that going to a Disney film on that day would be a lovely way to honor her. That was Ben- always romantic.  We had a beautiful evening.  And, now I have another special memory.

Superheroes of Caregiving and Grief: Gratitude and Perspective ‘Tis the Season to be Emotional