What Aladdin Knew About Appearances 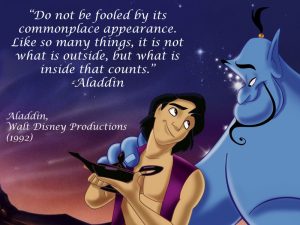 This time of year has become a difficult and confusing one and I am just learning to roll with my emotions rather than fight them. As I’ve written, as a teacher, summer is a delight. Unfortunately, summer comes with painful memories of much time at doctors and in the emergency room with my dad. And, in 2015, it was the time that Ben declined drastically, spent the summer in the hospital, and ultimately, passed away just before I began a new school year. It stands to reason that at this time of year I find myself dwelling on and reliving the many things that happened during Ben’s hospital stay. I think of the assumptions people made of Ben when they saw him in a scooter or electric wheelchair, or spoke with him and maybe had difficulty understanding him. I have learned that, as Aladdin said, the outside tells one story, but what is going on inside our hearts and minds that really counts.

ALS slowly stripped away Ben’s ability to move his limbs, chew and swallow, and it also caused his speech to be impaired. He was bravely determined to maintain as “normal” a routine as he could, despite those struggles. Of course, he did not like what was happening to him, and because ALS does not affect cognitive skills, he was well aware of what was going on. ALS was part of every single thing we did, every single day. But, he was more than the ALS that constrained him on the outside. Inside, he was still Ben.

With ALS came Ben’s deep feelings of alienation. Ben noticed that people changed with regard to their interactions with him. As it became harder to understand him, some people stopped trying. Speaking by phone was difficult because it was more difficult to understand him and because he could not always answer the phone quickly, so he would have to return calls. Some people sent texts because Ben could access those on his computer and could use a virtual keyboard to reply. I was always happy to come home and find him corresponding with someone because it kept him engaged in the world and let him know that people thought of him. But, in large part, he was alienated. His abilities had become limited, but he had not. And, he was hurt.

When we were outside and he was in his electric scooter, he chuckled because he said that his speech impairment seemed to lead people to believe that he was mentally challenged. I was glad that he usually found humor when people spoke to him as if they were speaking to a child. But, it did frustrate him when, upon hearing his speech impairment, people ignored him and only addressed me. I took the lead in these situations, turning to him and directing questions to him. Some people realized quickly that he could communicate, but others clearly lacked the patience. As his advocate who loved him, I lacked patience with those people.

When Ben went to the hospital, he was given a Bipap mask and put on a ventilator. This was a whole different kind of problem in understanding him. It was the first time that I had to try to read his lips, and it was challenging because the mask obscured his mouth. Aside from the fear of being in the emergency room and not knowing what was going to happen, it was extremely frustrating for him not to be understood. It was frustrating for me not to be able to understand him.

Once admitted into the hospital, we learned a way to spell out each word. Imagine spelling out each word that you say: For each word, letter by letter, first, I asked if it was a vowel. Then, I asked him if the letter was in the first half of the alphabet or the second. Once determined, I proceeded to spell out the alphabet until he nodded that I’d hit the right letter. Sometimes I could figure out the word quickly without all of the spelling. Not often enough. I wrote out the words and sentences. It was taxing. There were times that he shook his head rather than go through the process. When you are not expressing yourself, you begin to lose yourself.

A hospital is a busy place. Nurses, residents, doctors, medical students and a lot of other staff members filed in and out of the room. If Ben’s mask shifted, the alarm rang, which was stressful and scary, though easily remedied. Sometimes, people tried to talk to Ben. Most of the time, they talked to me instead, and they often did that right in front of him. Ben could not even move his hands or arms to signal that he had something to say. This was one of the reasons why, although people told me that I was spending too much time in the hospital, I felt compelled to be there. Also, Ben could not call for help. People did not always take the time to ask him questions and simply checked the numbers on the machines. On a certain level, it was understandable that staff was busy and as long as he was safe, they were doing their jobs and Ben was as stable as he could be in his condition.

What people did not realize is that what they saw on the outside was contrary to was going on inside Ben’s mind. Ben had a lot of opinions, he understood what was being said and asked, and, most of all, he mattered and he needed to know that. I found that a critical role that I played was as a facilitator of discussions between Ben and hospital staff, as well as visitors.

When people addressed me without acknowledging Ben, I turned to him and immediately engaged him in the conversation. I showed people how we spelled out words. I did not let people put words in his mouth. I also asked a lot of yes/no questions, which made it easier for him to respond. On the outside, Ben may not have appeared to be a vibrant person, but he was. Even I needed to remind myself of that when I got so caught up in caregiving responsibilities that I didn’t pay attention to who we were as a couple. I showed him love by holding hands, looking into his eyes and letting him know that even if we were struggling to communicate, I was there for him.

If you are in a position where you are visiting or dealing with someone who has difficulty communicating, please do not ignore that person. Acknowledge his or her presence. Show the person that they matter and are more than their medical issues. If there is a caregiver to help, still involve the person in your discussion. Express kindness and compassion and really look at them to see deep inside the person you truly know. Don’t assume that what you see on the outside is what is on inside. 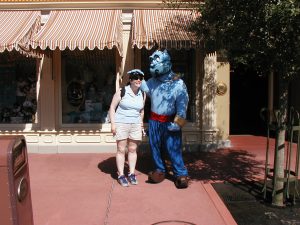 If I’d known when I met Genie that Ben would get ALS, I would have asked him to grant the wish of a cure.

Twist and Shout to the Memories With Me Evermore