On “The Incredibles” and Protecting Your Identity 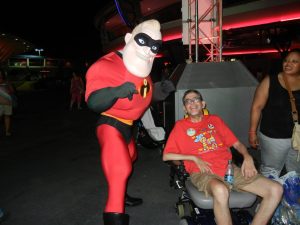 The Incredibles was released on this day in 2004 by Disney Pixar. Among Ben’s favorite super heroes, Mr. Incredible was second only to Buzz Lightyear (Mickey and Sully were in their own special category!). Thinking about that film made me think of an important quote by Mrs. Incredible/Helen Parr/Elastigirl: “Your identity is your most valuable possession. Protect it.” 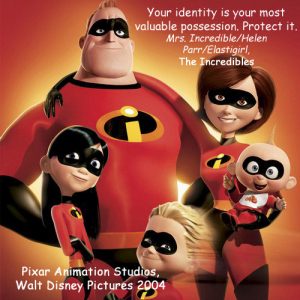 Ben, like so many people with terminal and degenerative illnesses, had to fight not only the illness, but to protect his identity. ALS took away many of his abilities, and it became increasingly difficult to engage in and enjoy things that were so vital to who he was. Music was one of those things, and it played an important part in our relationship. Ben loved song lyrics and would often call and sing to me. Song lyrics helped him express his feelings. I gave him an electronic keyboard one Christmas, with a software program to teach himself the piano- something he always wanted to do- and sheet music to some significant songs (yes, It’s a Small World was one of the pieces!) He practiced the songs and called me to play and sing. It was sweet and romantic, and that was Ben. ALS took those things away from him, shaking how he identified himself. He never stopped listening to music though. I loved that he was able to enjoy live music during our last visit to Walt Disney World. Seeing him playing the air guitar and bobbing his head is a very joyful memory for me.

As he lost weight and dexterity, Ben was more self-conscious. He did not want a lot of people to see him. When he rode around the city in his scooter, he was often so happy that he forgot about how he looked. At Walt Disney World, we were discreet when he needed help to eat and the Disney cast members are compassionate and helpful about things like giving the time needed to transfer onto an attraction vehicle. Fortunately, most guests are so caught up in their own magic that they don’t dwell on others, and since it is the happiest place on earth, people frequently offered friendly assistance if they saw that I was helping him out from or into his wheelchair. But, how you look is part of your identity, and Ben took a hit there. He told me that he tried not to look in the mirror because he did not want to see how he was physically changing, but he studied the photos from our visits, and compared his physical changes from visit to visit.

As Ben lost his ability to get around, he saw less people. As he lost his ability to communicate- talking on the phone became difficult, though he could text- he relied on people to reach out to him. Sadly, that did not happen nearly often enough. The fact that people slowly distanced themselves from him also took a part of his identity, because he felt that he was no longer the valuable friend or family member that he thought he was, and that was very disappointing to him. It broke my heart.

Ben’s sense of himself also suffered as his speech became more impaired. If he repeatedly said something that I just could not understand, sometimes he would just give up. We spelled out words by my reciting the alphabet and his nodding when I reached the correct letter. However, the length and tediousness of that process frustrated him and he began to weigh what he really needed to say. Not being able to express himself took a toll on his identify and his self-perception. Since I was around him most, it was usually easier for me to interpret what he was saying. When strangers had difficulty understanding Ben, they sometimes assumed that he was mentally challenged and spoke to him like a child or addressed only me. Often, Ben laughed about it, but on many occasions he felt invisible and very misunderstood. So, I involved Ben in the discussions to show people that Ben was fully capable of understanding and had lots of opinions. He was vibrant in so many ways and he loved to laugh. Unfortunately, not being able to say what he wanted and be truly heard sometimes caused him to withdraw.

In the hospital, we had to do more spelling of words when his mouth was obscured by the Bipap mask and then, after the tracheostomy, and he hated that. There were many incidents when staff ignored Ben and asked me questions that he could answer. I immediately addressed those questions to him so that he could participate in the discussion. Yes, it took longer, and it was not easy, but he mattered and staff had to accept and embrace that. Most truly were wonderful.

As I write this post I feel very grateful to realize that Ben’s personality shone as he left this world, according to his expressed wishes, surrounded by people he loved and requested to be present, and with music that filled his heart.

Throughout our journey, I also had to work hard to protect my identity. I have written that I lost myself in caregiving but I also found myself through that experience. Juggling a full-time teaching job with full-time caregiving had me running in circles much of the time. My priority was to ensure quality care for my dad and for Ben. When I was not actually performing various tasks for them, I was stressed about what might happen when I was not present. At school, my phone was always at my side, just in case. During the periods that I did not have classes, I could often be found making phone calls or sending texts to check on them or to follow up with their medical teams. I could often be found in tears as well, because that was something I felt that I could or should not do in front of my dad or Ben.

I tried hard to take moments to indulge in little things that I loved and that felt like me. If I texted Ben after school and he was feeling okay, I would stop into Sephora and paint my nails in 10 different colors. It was silly and whimsical, but that is the side of me that I could not always feel and I missed it. I did find that I lost my enthusiasm for doing things that I’d always loved, like looking at all of the holiday store window displays and attending the holiday craft markets, because I felt distracted and I lacked the spirit. I took pleasure in buying Ben gadgets and crazy tshirts and pajama bottoms at Old Navy because they always made him smile, brought us back to the fun days and added some levity to his being homebound and not dressing up anymore. Doing these kinds of things for Ben added the dynamic to caregiving that let me protect my identity as a caring child at heart. There were too many things that were happening that were serious and daunting. There were also growing feelings of anger, resentment and profound sadness about what was happening to Ben, to our home, and to our relationship. This was on top of the simultaneous decline and then loss of my dad to cancer.

I see my identity as the person who genuinely loves to be the friend who is there to help. My friends are my family. But, with so much responsibility as a caregiver, not only was I less available, I found that I needed my friends to be there for me, as back-up for Ben and to allow me to vent. I know it was not easy for them to listen to my woes, have opinions of actions I could take, feel worried about my emotional and physical health, but know that I felt paralyzed financially and emotionally, incapable of doing anything or creating change that might be upsetting to Ben and even to me. I did not like to feel overwhelmed and helpless. But, I lost myself.  My identity became Abby, the person who took care of her dad and Ben, Abby who was losing them, Abby who was falling apart. And, after I lost them, I really did not know who I was. I had no identity. I had to rediscover myself.

In grief, I did realize that caregiving is a vital part of my identity. My whimsy and passion and joyful nature shine more now, though I know that I am forever changed from my experiences. I am integrating my work as a caregiver- and it was work, albeit loving work from the heart- in my future endeavors. I am close to receiving my certification as a caregiving consultant, and volunteer with various support groups for people with ALS and their caregivers and loved ones. Some people have commented that it is too soon, or that I am dwelling in the past and not moving forward with my life, but I disagree. I know that it is an important part of who I am and I will protect it and, hopefully, I will be able to help others.

If you are the caregiver for a loved one and you are struggling with losing yourself, I would like to ask you to think about how you can take some quiet moments to remember who you were before the illness and the caregiving, who your caree was and is, and, if you are a couple, who you were before your relationship had to integrate a shift to patient and caregiver. That identity is your most valuable possession. Protect it by taking deep breaths when things get bad to remember, honor and cherish each other. This may seem trivial, but the thermos of tea that I drank on my daily 2.5 hour train ride back home after visiting with my dad in hospice became my precious “Abby time” to reflect, listen to meaningful music and read. Yes, phone was in hand for texts and issues that might arise, but each sip of tea allowed me to take a deep breath and just, as the Beatles said, Let It Be. Where you expecting Frozen’s Let it Go? Surprise!

Memories, Perspective and Disney Halloween Magic Semper Fi! To my Dad and All Veterans