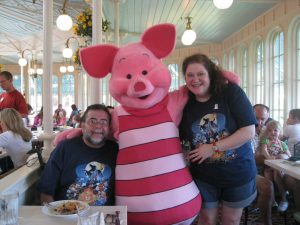 Yesterday, I received an email from a friend who was doing a crossword puzzle. He wanted to know who was Pooh’s 6-letter friend. I wrote back that it could be Piglet, Tigger or Eeyore, but Piglet was Pooh’s best friend.  Sure enough, the correct response was Piglet. I didn’t expect the day to be filled with memories that were conjured by that simple email.

When Ben and I first started dating, we often walked to the flagship Disney Store on Fifth Avenue in Manhattan. It is no longer at that location. We wandered the 3 floors and I often left with little gifts- the courting phase of a relationship is fun, indeed!

Having spent increasing amounts of time with me, Ben was becoming fully immersed in the Disney mindset, and loving it, sometimes to his own amazement.  One day, as we strolled through the store, Ben called me to look at a figurine, exclaiming, “Abby, look! It’s Piglet and his best friend, Pooh!” I stared at him, speechless, and then started to laugh. He shook his head, laughed, and said, “I was macho before I met you!” Truth be told, he was not so macho. He was a big teddy bear, and he could calm me down with his great hugs. He was also a big kid at heart, and he indulged my inner child, and that was us.  He bought me that figurine as a surprise, and it will always be so special to me. 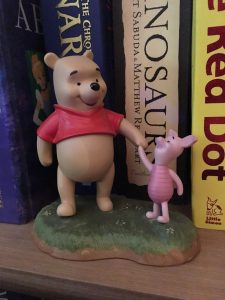 Because of that incident, Pooh and his friends had a particularly special place in our hearts. At Walt Disney World, we always ate at the Crystal Palace buffet, so we could see them. After Ben’s ALS had progressed a bit, I got him settled at our table and then got a plate of food for him. There was one time that Pooh came by our table when I was at the buffet. When I returned, Ben told me that I’d missed Pooh but that he told him that I was going to be disappointed that I missed him. Ben was concerned that Pooh might not have understood him, since his speech was impaired and the costume would make it even harder to hear him (Yes, we did know it was really an actor in a costume, but when we were at Walt Disney World, we completely dove into the fantasy)  A few moments later, I looked up and Pooh was literally running towards our table. He pointed to Ben and then tapped his own forehead, letting me know that he remembered to come back (I speak fluent Disney). Pooh gave me a big hug and we posed for photos. Ben was absolutely thrilled. In fact, making that happen for me was monumental for Ben because, at this point, Ben needed a lot of assistance, and that was difficult for him on a lot of levels: It was not easy for him to be so vulnerable, he was self-conscious, he liked to take care of me and he felt like he could not do that anymore, and there was always a looming worry of what was going to happen next. In this moment, Ben was the hero- he brought Pooh to me! This remains a most treasured memory. 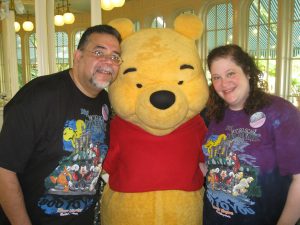 The memories are important. They are everywhere. People might find it odd that so much that I have and do is tied to Ben, and that I continue to regularly share these memories and talk about him. Am I dwelling in the past? Am I keeping myself in a relationship that is no longer here?

There are times when I find that I do want to retreat into the comfort of my memories with Ben. There is also a feeling that I want and need to keep Ben in people’s hearts. I still have a relationship with Ben, though, of course, it is changed. He now resides in my heart and guides me. The fact that we had a perfectly imperfect relationship makes me want to find love again and to create new special memories, though it is also hard to imagine. 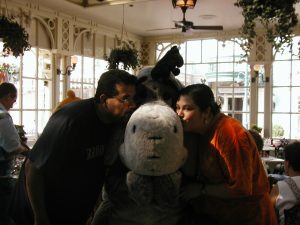 Grief is predictably unpredictable, and I do measure my reactions to these kinds of occurrences.  Am I doing better? Am I handling the grief differently? Better? It’s a day by day co-existence. Yesterday, I found that although the email from my friend made me stumble at first because I immediately thought about how much I miss Ben, I found myself smiling throughout the day as our sweet Pooh memories popped into my head. That was a good feeling. I know and am comforted that Ben is still with me, and that our time together- the good times and the ALS times- has helped to shape me. I struggle with the reminders that our time was cut short and there will be no new memories with Ben. I do feel like I am becoming more accepting of and comforted by knowing that he is with me in my heart, so he will be present in my future. 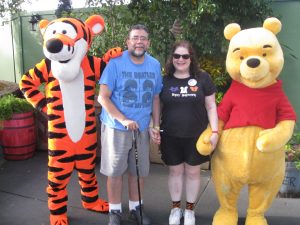