The beginning of a new year should be a positive time of looking ahead, setting goals, and optimism. For me, I kind of dread January and February because of the anniversaries- my mom died in January, my dad’s birthday and death occurred two days apart in February, and Ben’s birthday was in February. All I can do is sigh. I guess the melancholy that looms conjures for me of the uglier and sadder caregiving memories, and strengthens the waves of grief.

Last year, I was thrown when Ben’s table collapsed during the holidays and I had to throw it out (click here to read about the things that mattered). I still miss that ugly table because it held so many beautiful memories of Ben.  Then, I was unnerved when I added new ornaments from London to the tree because everything about the tree represented Ben and me. This year, I was prepared for the conflicting emotions as I decorated the tree. I still put the Ben’s favorite ornaments exactly where he liked them, so he could see them from his chair at his table.

When I plugged in the pre-lit tree I saw that the lights didn’t work in several places. Another heartbreak. Ben got that sparkly pink Christmas tree for me when having a real one became too complicated given our space. I admit that I get sentimentally attached to a lot of things, as evidenced by my home filled with mementos from loved ones and special times. Therefore, it is hard for me to part with things that Ben gave me, because represent parts of our relationship. I kept the tree up for the holiday season, feeling that the lack of brightness reflected my mood, and I procrastinated about taking it down. I knew that dismantling the tree meant throwing it away.

Yesterday was the day I had to take the tree out to the curb. As I looked at it, the sadness I felt was not just about letting go of the tree, but of how small and insignificant the tree looked on the tree. Nobody passing this discarded tree would know what that tree represented, how it brought joy during holidays that were not joyful. They would not know that it was the last tree Ben ever saw and how it was decorated according to his wishes and delights.

Although I now feel particularly vulnerable, and I was thrown by the loss of our silly, sparkly pink tree, I also realize that Aladdin’s Iago was right when he said, “You’ll be surprised the things you can live through.” That’s a good life lesson and an important reminder. Although losing the tree doesn’t come close to the tragic and frightening events that occurred as I watched my dad and Ben succumb to their illnesses, it conjured many of those bad memories.  The tree was yet another symbolic loss that amplified that loneliness and makes me wonder when and if all of this will end. I do know that somehow, I keep going.

Throughout my life, I have generally thought of myself as a crybaby, very squeamish, and not physically or emotionally strong. I had a hard time comprehending why people told me that I was brave, when I was not the one facing death, though I have come to understand what was perceived as my bravery. I will always believe that caregiving was the most important and loving thing I have ever done, but it was also intensely difficult, devastating and exhausting. This is probably why I relate to Christopher Robin’s quote, “You are braver than you believe, stronger than you feel and smarter than you think.”

During caregiving for my dad and Ben and then, in grief, despite the times that I felt so close breaking down and so incapable of meeting the challenges, I must remind myself that lived through it. In fact, I did more than live through it because Ben and my dad knew that I did my best for them, advocating, caring for and loving them.  And, although there are still unexpected triggers that cause me to stumble in grief, I know that Iago was right and I’ll continue to get through the waves of sadness and floundering. After all, I don’t want the worst times in my experiences to be what define me or the deeply loving relationships I had with these people whom I love and miss so much. It’s taken time, but I have come to realize that integral to getting through these times is my finding ways to honor my Ben and my mom and dad every day- even through my blogging- and keeping them in my hearts, letting them guide me as I reshape my life, embrace the present, and look to the future. 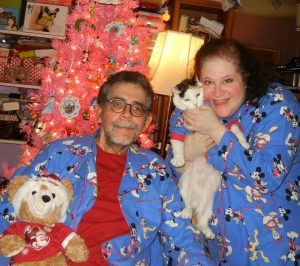 Our last family Christmas/Chanukah, 2014 with our sparkly pink tree. We got matching Mickey and Friends pajamas- even Disney! (She liked the pajamas, but not the picture-taking!) 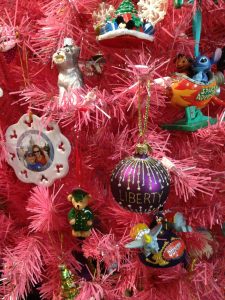 Pooh and Piglet, Ben and Abby, Best Friends, Best Memories It’s A Small World After All