ALS and Number 4: A Yankees Jersey Tells a Story 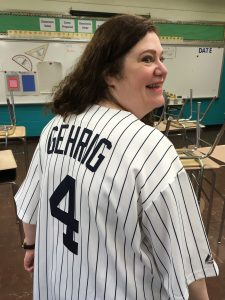 Yesterday, I wore Ben’s Lou Gehrig Yankees jersey to school. I have made it a tradition to wear the jersey once a year during ALS Awareness Month. The jersey is significant to me because when Ben asked me to get it for him when was diagnosed with the disease. He wanted to be a fighter like Lou Gehrig. Ben barely got to wear his jersey, but now I have adopted it and I feel proud and especially connected to Ben when I wear it. This year, going on three years since he left this world, I did choke up in one class as I briefly talked about Ben and ALS, but it’s okay if the kids see me being human.

My students expect to see me in a Disney t-shirt when I’m dressing casually or during our themed dress-up days. They are shocked but thrilled to see me in a sports jersey. They run and ask me if I am a Yankees fan. I smile and shrug. Of course, they look to see whose number and name I’m wearing. Immediately, I get the question, “Who is Gehrig?”

The first year that I wore the jersey, one of my middle school students asked me why I wore this particular jersey with the name of a player he did not know. I said that my husband had the same disease Gehrig had. He asked about it and I asked if he ever heard of the Ice Bucket Challenge. He did, but he did not make the connection to a disease. I told him the Challenge was to raise money to find a cure for ALS/Lou Gehrig’s disease. Trying to make sense of it, he asked if it was a disease where people were cold all the time. It made me smile then and it still does. If only it were that simple! They are young, they do not need a lot of details. Some will ask many questions, some will Google it, and they will learn. And, that’s a good thing.

I’m dedicated to taking the opportunity to raise awareness of ALS because Ben’s and my  experience with ALS truly is never out of my mind. The students that I had while my dad and Ben were alive and ill learned about compassion when they saw me run out of school in tears in a panic because of an emergency, or when they listened to me explain on rare occasions that although I never use my cell phone in class, I was awaiting an important call from a doctor. And, when my phone rang, they were silent, and I know that many felt my worry. Some were sympathetic and compassionate. Those are life skills you cannot gain from a text book. They are important. Some kids do not learn this at home.

This year I am in a high school and the kids had many questions about ALS. We talked about how Ben had to have all of his food pureed, how if his hand slid off of his computer mouse that he had to wait for me to reposition it so he could type, how we sometimes had to spell out entire sentences, letter by letter. It was the inability to communicate that struck them the deepest, which is perhaps why the Project ALS Don’t Talk-a-Thon is so resonant and important. Mostly, we talked about having compassion and not making assumptions about people with disabilities. Some of them sat in stunned silence with their mouths open, some had questions about feeding tubes and ventilators, others were uncomfortable talking about anything sad. One student, who is going through her own family issues with illness, jumped out of her seat and hugged me. It was an emotional and unifying feeling for the class and I hope that feeling fuels the way they treat each other, particularly during difficult times. I think it does, because today, some students asked if I was feeling better because I must have been sad thinking about Ben, while others said that they spent a lot of time thinking about things that I told them.

Ben wanted to fight ALS, and he did, very bravely. Now, I fight to advocate for awareness and to support efforts to understand and work towards a cure for the disease.I may teach Spanish, but my class encompasses cultural understandings and often addresses issues of understanding and interrelations within the context of holidays and current events. I dedicate this small amount of time to proudly raise awareness of ALS and all it encompasses. While I love to see the students’ glee from seeing the klutziest, Disney-est teacher in school wearing a sports jersey, they are also learning about a man named Lou Gehrig who had a terrible disease that my husband had, too. They see how their teacher has a “real” life in which she cared for and lost her loved ones, experiences grief and continues to live and love and care for her students on our good and bad days. Life lessons. You don’t get those from textbooks.