You’ve Got A Friend In Me- Friendships During Caregiving, Illness and Grief

You’ve Got a Friend in Me
By Randy Newman

Some other folks might be a little bit smarter than I am
Bigger and stronger too, maybe
But none of them will ever love you the way I do
It’s me and you, boy

Last week, November 23, marked the 23rd anniversary of the release of the original Toy Story. Ben absolutely loved Buzz Lightyear and we both loved this film and its sequels. In the context of Thanksgiving and the film’s anniversary, I’ve been thinking all week about the lyrics to the song You’ve Got A Friend In Me.

The song applies to so many aspects of my life. It is almost a caregiving anthem. I was there for Ben no matter what, seeing him through the darkest days. As the song says, there might have been stronger or smarter people, but the love we had was stronger than those qualities. As Ben was more vulnerable and more dependent on me for help, I know that he worried that I would say that I could or would no longer be able to take care of him. In his heart, though, when the road looked rough ahead, Ben knew that I would never leave him and that no one would ever love or care for him the way that I did. The unique bond we shared in our romance, despite the tragic circumstances, was a supreme kind of friendship.

Thanksgiving is a difficult time because it is a painful reminder of the family I no longer have. To be more positive, I try to put my energy into reflecting on how grateful I am to have friends who have become my family. There’s good reason this song comes to mind at this time.

Friendships can help to sustain us. I consider myself fortunate to have known my best friend for more than 50 years and to have had my closest friends for much of my life. We have been there for each other through the good and bad times. Sadly, over the past several years, I feel like I needed my friends often- as my dad became more ill and as Ben’s ALS progressed, and then, of course, as I grieved their loss. My patient and devoted friends listened to me repeat the same issues without any resolutions, and despite any opinions they held, they did not give up on me or Ben. They were also there to help Ben, being my backup if he needed assistance when I was with my dad. They voiced their concern for me. They asked what they could do for us. I knew that, as the song says, “there isn’t anything I wouldn’t do” was the way my friends felt about me, and it was and is mutual. I always placed a high priority on being there for my friends, but I still was not happy being on the receiving end of the giving during this time. At the same time, it was a huge comfort to know that I could depend on my friends, and it is beyond heartwarming to see them cheering for me as I have more steadily and confidently moved forward.

Sometimes friendships last forever, sometimes they are brief but deep. Sometimes we make connections that touch our lives although they are not even actual friendships. When I was the caregiver for my dad and Ben, I experienced all of these relationships. There were the people who unexpectedly reached out with a kind word or helpful gesture. There were people whom I did not know very well who had helpful insight, were there to talk at just the right moment, or were simply genuine in their expressions of concern. There were even people I did not know well who were kind enough to keep Ben in their hearts and do the Ice Bucket Challenge or contribute to ALS causes and our fundraisers with their families in Ben’s honor. I will forever be grateful for those moments and people. It’s an important reminder of optimism and faith in humanity.

Friendships also shift over time, even during good times, and that’s natural. People move, they get involved with different activities, have families. Terminal illness and my caregiving definitely caused a shift that forced me to evaluate what I considered good friendships. Some people whom I thought were good friends proved to be terribly disappointing. These are the people who said they never called because they knew I was busy, or who did not really ask much but were extremely judgmental. They were people who wrote lots of niceties on social media but never actually reached out or demonstrated friendship.

There were also people who, when we did communicate, would tell me that they knew they weren’t being good friends, seeming to want me to excuse them. At first, I did console them and say that I knew they were thinking of us and would have been there if I’d asked. Eventually though, I felt no sense of responsibility to make them feel that they were great friends because it simply wasn’t true. I felt abandoned when I needed to feel friendship. I suppose I could have reached out and asked for help or support or just a friendly conversation to help me feel like I was connected to my life and friends beyond my caregiving world. It’s hard to do that when you’re feeling overwhelmed by life. That would have been a way to care for myself but I was not up to it. I needed people to step up to me. When they didn’t, it was hard to accept that I simply didn’t fit into the lives of some friends the way I wished or expected. In many cases, I have remained friends with these people, but I do not feel the connection that I used to feel.

Ben also struggled with friendships as his ALS progressed. There were a handful of people who were loyal to him throughout his illness. ALS is known to be an isolating disease and, indeed, a person with ALS (pALS) loses the ability to easily communicate. Ben managed to text through his computer. His speech became impaired and if it was too difficult for him to be understood, he gave up trying. The number of people who reached out to him steadily dwindled. He felt unimportant and abandoned, which was heartbreaking.

We’ve heard the expression that to have a friend you have to be a friend. Friendship is a beautiful gift to give and receive. I do have to remind myself  that everyone has their own definitions of friendship and people form friendships for a variety of reasons with many different expectations of giving and receiving friendship. Some people need their friends during difficult times and others withdraw. It’s also important to see a big picture: as I needed more than I could give while my dad and Ben were ill, my friends might have those experiences as well. We cannot always be there for each other. What we can do is communicate openly, honestly, and compassionately.

It’s not always easy to know how to be the best friend you can be. Sometimes, in the case of someone who is caregiving or who is ill, it means asking how you can be a good friend, or just being genuinely present and available to listen, validate and comfort, or to let your friend know that you are giving them the space they seem to want but that you are there for them when and if they are ready for you.

Through our actions and expressions of love and support, I believe and am so very grateful that my dear friends and I agree that
And as the years go by
Our friendship will never die
You’re gonna see, it’s our destiny
You’ve got a friend in me. 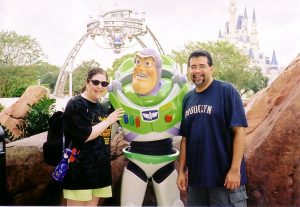 Gratitude is a Superpower on Thanksgiving and Always! Happy Birthday, Walt Disney!