Those “Oh, Bother” Moments of Grief 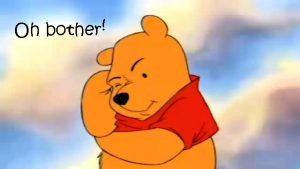 The Many Adventures of Winnie The Pooh
Walt Disney Productions

Friday, January 18 was Winnie the Pooh Day, and it was ironic, because on Thursday, I had an “Oh, Bother” moment.

I have written a lot about grief and how incidents unexpectedly trigger setbacks. Last week, after four days of horrible dizzy spells, I decided to go to the doctor. It takes a lot for me to agree to go to the doctor. I am afraid of doctors, afraid of pain, afraid of the anticipation of anything and everything related to the visit, especially if blood tests are involved.

As I described my symptoms, the doctor said it was an inner ear issue, benign positional vertigo. He gave me some tests of my coordination. They were the same things that Ben’s doctor did when he had his ALS visits. I had not thought of those in a long time. Suddenly, I was back in those days of watching ALS take away Ben’s abilities. I found myself lamenting the ensuing setback, but I tried to intellectualize the process, recognizing the trigger and foreseeing the bad feelings. I was back in a funk. “Oh, bother!”

Since Thursday, I have not been able to shake the memories of those ALS clinic appointments. Ben liked going to the appointments because the ALS chapter sent an ambulette for him and he liked getting out of the apartment, but he began to almost resent the appointments because he felt like the team got their data but he got nothing because they really could not help him. ALS has no cure. During those appointments, I watched him do the exercises that I was asked to do. I did them with ease, but with Ben, his abilities kept diminishing. He was always disappointed, and I was heartbroken to see him look so defeated and to know that things were getting worse. Reliving those days and already literally feeling shaky, the grief took away my emotional steadiness. “Oh, bother.”

I know these feelings will subside and I know that at some point, some other trigger will set me back. Like the vertigo, there will be episodes where, in the midst of a normal day, I will feel lousy and all of my memories and emotions will spin uncontrollably and uncomfortably, but I will also find my footing. It occurs to me that grief is not curable but it has become more manageable. I realize that it is predictably unpredictable. “Oh, bother.”