What Olaf Knows About Caregiving and Melting 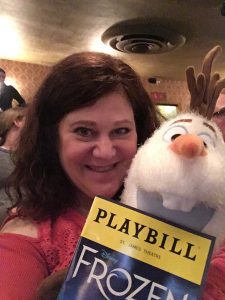 Olaf had to come home with me!

The weather in NYC has been crazy. We were in a deep freeze one day, and then near 60 degrees two days later. Of course, Frozen came to mind. I’ve written before about what Olaf knew about love and melting (click here to read that post), but the drastic weather and reminded me of Olaf and his lessons on love and caring. The sweet and goofy snowman continues to sum up my caregiving experience at its core.

My apartment is generally as warm as a sauna. In fact, I have been sleeping with the air conditioner! During that one ridiculously cold day, even my apartment was cold. I could not help but reflect on days spent trying to help Ben to keep warm.

Before ALS, Ben and I both liked the cold. Other than Walt Disney World, Vermont was our favorite getaway, especially in winter. Once ALS progressed, the cold posed challenges and problems for Ben. It was harder for him to move when he was cold. I think it may also have affected his respiratory comfort, though his significant decline in that area began in the warmer weather.

Although it is usually very warm, the apartment is drafty and Ben could not tolerate the cold. I bought big plastic insulation tarps and put them over our windows. They did help but it looked terrible and they came loose frequently, sometimes requiring middle of the night fixes.  We did what we had to do. We became accustomed to living crisis to crisis in an apartment that was a disaster.

Most blankets felt heavy on Ben as his strength diminished, and piling on sweaters made movement even more difficult than it had already become due to the ALS. We found a couple of quilts that were the size of a throw, which made it easier for him to manage. We could not sleep under the same blanket because any tugging or shifting made him uncomfortable. A blanket may seem like a very minor accommodation, but it symbolized relationship changes that took an emotional toll. Suddenly, the life we enjoyed began to  change and foretell a sad future, and the way we related to each other changed in very profound ways as we shifted from being husband and wife to patient and caregiver. As Olaf said, “Some people are worth melting for.”

I am resourceful and a born shopper, so I was always delighted to find solutions, even if they were temporary. Ben was very skeptical of the little space heater that I brought home one day. I plugged it in as he said it wouldn’t help. It did! He loved that space heater!

I made a blanket of some of our favorite photos from Walt Disney World, and a microfiber towel as well. For the days that Ben did not get to his computer, or felt chilly, he was always surrounded by the photos that he loved so much. 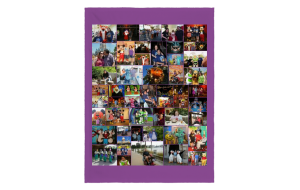 Dressing for cold weather, even within our apartment, also required creativity. Ben loved insulated puffer vests because they kept him warm without bulk and heaviness, and also  gave him some freedom of motion in his arms. He liked sweatshirts that were zippered hoodies because they were easier to put on and to remove, even though he needed assistance to do so. He did find adaptive zipper pulls that he liked. These gave him some independence and that was important for his frame of mind.

Fleece sweaters were often a great option because they were lightweight. Waffle/thermal shirts were cozy for him and allowed for easy layering. He was amused by the camouflage shirts I found for him because they reminded us of how much my dad, the Marine, loved his camouflage! Even as the temperatures dropped, Ben still wore his favorite regular tshirts underneath his warmer clothes. He loved his tshirts. They keep me warm now in the tshirt quilt that I made from them. 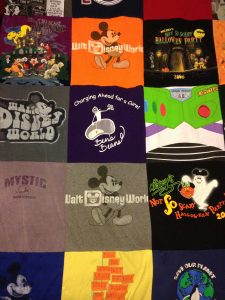 It was definitely a challenge for both of us to be comfortable in the same space. Once again, Olaf got it right when he said, “Love is putting someone else’s needs before yours.” I was warm or Ben was cold, but Ben needed to be warm. Physically, the apartment was a mess, with supplies accumulating, space shrinking, and furniture moving according to his needs. At one point, my dresser had to be moved to accommodate his chair, and it blocked the closet. For several months, I either wore what was in the drawers or whatever my hand could reach in the closet. Now, I look back and laugh at the chaos that was our life. Then, we lived crisis to crisis, and despite our frequent ability to see the hilarity in the situations, it sometimes left us feeling helpless and hopeless.

Now, I am trying to keep my cat, Disney, warm. With her arthritis and cancer, she is having some trouble walking around. It breaks my heart but I am trying to keep her as comfortable as possible so that she has a good quality of life. I use Ben’s hot water bottle and our heating pad and try to convince her to rest on them. I did put her in her little pajamas, which she actually seemed to like.

Going through these motions does leave me feeling a little melancholy. It feels like a long time ago that these were my caregiving responsibilities, and it also feels like just yesterday. Although I don’t mind being chilly- in fact, I prefer it, I always feel a little guilty admitting these things. I’d tolerate any kind of weather if Ben was here and well. I miss Ben. I cannot deny the inconveniences and the emotional pain we both experienced. Ultimately, Ben’s needs unquestionably came first, and a little melting was a small price to pay. My heart is warmed to know that now he is free of the constraints of ALS.