What Baymax Knew About Tears and Grief 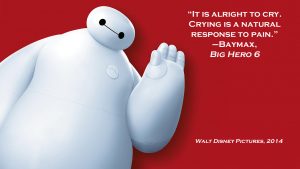 Last night, I watched my recording of an episode of The Aquarium (it’s on the Animal Planet channel). I was so excited about this series because it features the Georgia Aquarium, a very special place that I visited for the first time last summer. In fact, it is so special that I am returning in August.

Penguins were featured in this particular episode. Ben and I loved penguins and last summer, I was fortunate to be able to meet two of them during encounter programs at the Georgia Aquarium. It was a bit unnerving for me because doing a penguin encounter was something I had tried to arrange for Ben and me, but the weather was terrible when we were supposed to go and Ben was afraid to venture outside. Sadly, we never had another opportunity, since he passed away about six months later. It felt simultaneously right and wrong to do an encounter without him. I felt like I did it for us and participated through his eyes. Maybe it’s wishful thinking, maybe it’s justification, but it gives me peace and lets me feel him at times when his absence is suffocating.

In this episode, a baby penguin was born, needing help to hatch and then he was not thriving. They did a lot to help this sweet baby and ended up intubating him. Ultimately, they euthanized him. I was already in tears seeing the tube in his mouth- so tiny to go through this. It summoned memories of when Ben was intubated, which was terribly frightening. Loving penguins as we did, I know that watching this scene also would have devastated Ben. I was hoping for a happy ending and it didn’t happen. The Aquarium wants to present an accurate portrayal of what goes on. I watched the staff cry as they watched the baby leave the world and I sat on my sofa bawling as I have not done in a while. Even today, I have not been able to compose myself. I am back in the saddest and most frightening of memories.

I know that I cry easily and I accept that about myself. I love animals, so seeing a little baby born and then not able to survive is heartbreaking. Having had to put Disney to sleep just a few months ago, and my cat, Tiffany, ten years before that, I know the heartbreak of letting go despite knowing that it is the best thing for your furbaby. Maybe because this was a penguin- the animal Ben and I made ours- made it that much worse. I often talk to Ben, especially if I feel his presence, and I kept looking at his chair hoping for him to console me and knowing that he would feel and share my pain. That may not seem logical or reasonable, but it works for me. Sometimes.

I certainly think about our days in the hospital, but I haven’t relived for a while the intense fear of when Ben had to be intubated. It was done in such an emergency that they performed the procedure in his hospital room rather than bringing him to an operating room. The frenzy was scary. I busied myself by updating his family, but a texting drama was begun by a couple of his family members who were never present but seemed to think that judging me compensated for their lack of attentiveness. Although I refused to participate, I can’t say that it didn’t weigh on me when I still felt that it was responsible to text updates. After the procedure, Ben had to go to the ICU, which I was told was protocol but was still terrifying. Unlike the penguin, with ALS, we knew that Ben was going to die, but these were crises and where death loomed over us, now it was like a flashing neon sign. Listening to the Aquarium veterinarian talk about euthanasia brought back all of the memories of Ben ultimately deciding that he was miserable on the ventilator and choosing to leave this world. So, here I was on my sofa crying for the penguin and for Ben, remembering not the music and the love that surrounded Ben on the day that he left, which I try to keep at the top of my memories, but instead, reliving all of the fear and devastation of that time.

I am drained. I was unprepared for the setback. I looked forward to seeing this episode with my little friends from the Georgia Aquarium. I was happy to recognize some of the staff members who led the encounters I did with the penguins, dolphins and sea otters. Now, I am back among the worst memories of Ben’s battle with ALS and the tragic choices that he had to make. August will mark four years since Ben left. Some people would say that I should not react as emotionally. Maybe I shouldn’t. But I did. I am always wary of when I will have a setback. This was a particularly bad setback, but I’ve learned that I will bounce back. It’s grief. On a daily basis, I’m actually doing fine, but that doesn’t erase my experience and the loss. So, I accept that just as I smile when I think of the wonderful and loving memories- even those during Ben’s ALS days- I will cry when reminded of the pain and loss. It is unnerving and exhausting, but as Baymax so astutely says, “It is alright to cry. Crying is a natural response to pain.” If I want to put a positive spin on it, it’s because I was fortunate to know and give so much love and caring that I feel the pain so deeply. Grief is never easy or predictable.

With Love and Respect on Memorial Day- Semper Fi, Daddy Where Do I Go From Here? What Would Pocahontas Do?