Advice From Merida About Bravery, Grief and Destiny 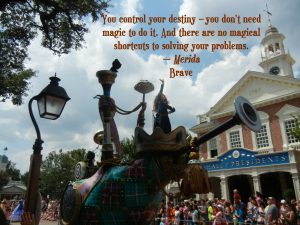 Sometimes, I wonder if I am going to traverse the rest of my life missing the people I loved and lost and if I will ever be able to participate in life without attaching memories of them that add a shadow of loneliness. At those times, I also wonder if those shadows are still positive because of the good and significant times, as well as the love, they recall. For a while, I held myself back from doing things for various reasons: either it was too sad to do things without my dad or Ben, I felt guilty enjoying things that they would enjoy, or enjoying life at all, or I was so indecisive about testing my emotions that I just avoided situations. Sometimes, I’ve done things, like crossing Abbey Road, for Ben. I know that some things I do will make me cry but sometimes I need that, too. Grief is hard. Even when it shifts from the sharpest pangs, I feel like it leaves me in a kind of limbo.

I had an experience yesterday, and have an upcoming experience, which made me think of something said by Merida, from Disney’s Brave: “You control your destiny- you don’t need magic to do it. And there are no magical shortcuts to solving your problems.” I cannot change the pace or emotion with which I have dealt with loss, grief and delving into life. I will not know how I feel about doing things that I closely associate with my dad and Ben until I do them. I do feel in my heart that even though it’s difficult, making new memories will simply have to include my love for and memories of the people I loved and lost. Only I can make those decisions that will ultimately let me find myself and a real contentment and purpose.

Yesterday, I saw the new Downton Abbey movie. I absolutely loved the tv series, and I was eagerly awaiting this film. As I walked to the theater, my mind was flooded with memories. I started watching the series because my dad liked it. I thought it would be nice if I could talk to him about it. It did not take long before I got caught up in the story, and it surprised me that Daddy, who generally preferred documentaries, would like a drama with some soap opera aspects.

The seasons aired in the UK before here, so in America we were always behind in the storyline. Ben was homebound and loved to do research on the computer, so he managed to find the episodes that were airing in England. I was able to know what was happening before it aired here! Ben was so proud. It was a way that he was able to do something for me at a time when he needed so much done for him.

When Daddy was in the hospice, I had to catch a train back to the city before Downton Abbey aired, so on Sunday evenings, the nurses were kind enough to put the show on for him. He slept most of the time, but I thought it would be a pleasant comfort for him to see it if he woke up.

I loved the film. It was like visiting with old friends. The setting and the costumes were magnificent and the story lovely. I laughed and cried. It was also like stepping back in time to when my dad and Ben were here. Once again, I missed them and I felt the weight of the void in my life.

I think the film experience is coupled with my mixed emotions about my upcoming trip to Walt Disney World. I haven’t been back without Ben. Next week, I will go with my dear college friend and her two daughters and we will actually do a little memorial for Ben and even for Disney, my cat. I’m so grateful to be going with them, but I am also anxious about being there among all my memories. It feels awkward to be excited about being there, almost like a betrayal of Ben. It’s difficult to look forward to enjoying the attractions that we had to abandon once Ben couldn’t transfer from his electric wheelchair. He had always told me to go by myself, which was so sweet, but it would not have been fun to know that he was waiting outside for me and it would have been too much of a foretelling of my future alone. As completely full of joy as I want to feel, I admit that I feel overwhelmed by conflicting emotions and worry of how I will feel once I arrive at what for Ben and me truly was our happiest place on earth.

I realized a long time ago that there are no shortcuts in dealing with grief. It has to run its course and I have to listen to my heart. Sometimes, things are easier and other times harder than I expect. I’m not afraid of tears. Missing my dad while sitting through the film today let me recall how much we shared and how I tried to make him comfortable when he was ill. I am not sure if it is my destiny, but those are the feelings that helped me realize that I am meant to continue to support other caregivers.

I wondered if I would ever be able to go to Walt Disney World, and I might have avoided a return, but my friend was so incredibly kind and generous to offer the possibility of a return and a different kind of a trip in which we would also pay respects to Ben.  I know that it will be emotional, but I also want it to be joyful. After all, Ben and I had so much happiness there. I have taken so many steps forward and my loved ones have been at my side. With this trip, despite my trepidation, I feel like I am bringing new people beside me while Ben and our memories come along in a different way. There might be some setbacks, but I feel like this opportunity came to me at this time because I am ready for it. As far as my destiny, I still am not sure what that is, and it is daunting to think that I control it beyond the pixie dust, but I know that with each step I have taken to reshape and enjoy my life, I am moving forward.

“The Princess and the Frog”: More Than Turning Frogs Into Princes, It’s About Looking Toward the Stars Reflections on Returning to Walt Disney World, Friendship and Getting Unstuck From Grief