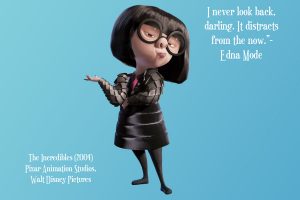 There are times that I know exactly what I want to write about. There are times when I have a plan but an event arises that causes me to write about something else and postpone my original post. For the past couple of weeks, with my birthday and Halloween as events that literally haunt me, I was struggling with so many thoughts and emotions that I couldn’t quite organize my thoughts and simply did not want to fight with myself to make sense of everything I was feeling. I kept rereading my posts from previous years and thinking about this year and how it is different, and suddenly this quote by Edna Mode stuck out to me: I never look back, darling. It distracts from the now. This is a quote that will always intrigue me and yet, as much as I love Edna and her indisputable fashion sense and see her point, I disagree.  Looking back has its value and significance. Rereading my blog posts and revisiting milestone dates over the years, as well as moments in caregiving and grief, has allowed me to reflect on how far I have come and also where I can continue to grow as a person. This was particularly important to me at this time.

October is always a challenging month because aside from my birthday and Halloween being a holiday that Ben and I adored, Ben even proposed to me on Halloween at Walt Disney World! I still avoid my birthday to a large degree, and I have wondered if I would ever be able to feel the fun of Halloween without Ben. I did not know if I would ever be able to return to Walt Disney World without Ben. I knew it would not have been wrong to return, but it didn’t feel right.

This was my fifth Halloween without Ben. It was last year that I was finally able to go through our collection of Halloween decorations, many from our last trip to Walt Disney World. I chose to display a couple of things, and I got a few new things in case being surrounded by the old memories was too difficult. It was interesting to me that a Halloween countdown calendar figurine, which I reluctantly displayed, proved to be very comforting. This was something that I got for Ben as a surprise. I had placed it on his desk for him to see when he woke up and was situated at his desk by his home health aide. He loved it and thought it was hilarious to count down to Halloween. I thought that I might be too unnerved by the idea of counting down time, since Ben’s battle with ALS seemed like a countdown in his life, and the memories of giving it to Ben when his ALS was progressing more rapidly. But, unpredictable as grief is, using that countdown calendar and saying a few words aloud to Ben every morning, has continued to bring a smile to my face. Then, I play the little wind-up music box that plays “Grim Grinning Ghosts,” from Walt Disney World’s Haunted Mansion, which I purchased last year because it reminded me of Ben and I know he would love it. He always said that once he was gone he would be a grim grinning ghost. These things and rituals, including writing blog posts, help me to look back on my memories and see that I am slowly and steadily gaining control of my present. 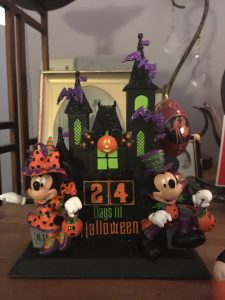 I do love to remember the many wonderful Halloweens that Ben and I spent in Walt Disney World. I am most proud of our last Halloween at Walt Disney World, because it was filled with so many surprises that I had arranged for Ben. I was July, after all, so arriving at our hotel room that was decorated like a haunted mansion was a true surprise for him! To read about that visit, please click here. I continue to play the soundtrack to the “Boo To You” parade from Mickey’s Not So Scary Halloween Party. Ben loved that parade even more than I did and I loved to watch his face at the sight of the first float. Was it living in the past? Yes, for a while, and that was important to me. I needed, and still do, to vividly hold close to my heart those wonderful, romantic and whimsical times. I also needed to remind myself that although I didn’t always do things as I would have wanted, I loved and dedicated myself to Ben and always tried to be the best caregiver that I could be. By reliving memories, I keep his spirit alive. 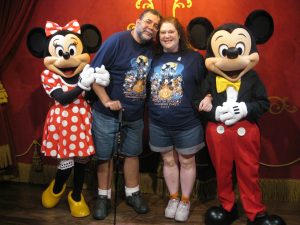 2011- Mickey’s Not So Scary Halloween Party. I held Ben on one arm and Minnie held him on the other!

Something that stood out to me from a post I wrote in 2017 was that I referred to myself as more of an observer than a participant in Halloween. That was something profoundly true about my entire life after Ben left this world. For a while, I went through motions and floundered, not engaged in life. I accepted invitations to socialize but ended up feeling terribly alone and lonely. When Halloween arrived, I lived in my memories and grieved the Halloweens that Ben would not have and that we would not enjoy together. I lost myself in our photos and videos, just as Ben had done throughout his illness, crying for the loss of Ben, the life we had and the life we would never know. I brought candy for my students and enjoyed seeing the costumed kids on the streets, but I did not take part in any festivities. Last year, I baked my signature Halloween cookies, something Ben enjoyed watching (and eating!). Baking and decorating cookies is like my therapy, so I was able to get lost in memories and the deep connection to Ben and to my grandma, who taught me how to make my great-grandma’s recipe. Grandma really would be delighted by how much I have done to decorate them. Still, emotionally, I was not a part of the holiday. I was trying to keep my Halloween spirit by recreating rituals that existed for Ben and me, but past was conflicting with present. I don’t know what I even expected or wanted. As I reflect on the past few years, I think I can say that the fact that I did question how and when I would step back into the world of the living indicates that I did not want to stay in the past. The fact that I do look back at my posts to see if there have been some shifts, and hoping to see them, says that I am ready to make those shifts. Edna makes a point in that if I had only lived with my memories, I would not have even begun to consider how to tiptoe back into the world of the living and thoughts of reshaping my life. I had to find a way to look back, be present AND look ahead, and in grief that is a daunting task. It could only be accomplished in my own time and that’s always my advice to those in grief who ask when things will change or how long they should grieve in any manner. I went with the flow of my emotions (and, truth be told, the flow of the tears). I didn’t fight feeling bad and I didn’t fight feeling okay. Now, I don’t fight feeling downright happy either. 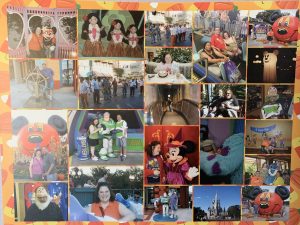 I came to terms with not knowing if I would ever return to Walt Disney World for Halloween and being okay with leaving it as a treasured memory that just belonged to Ben and me. However, last month, thanks to my friend Monica and her two amazing daughters Abby (my namesake!) and Andi, I was able to return to Walt Disney World and to Mickey’s Not So Scary Halloween party. Please click here to read about that experience. I was nervous about how I would feel being back without Ben, but I was looking forward to having a very different kind of experience with friends who are family. We did have a truly magical and, for me, a kind of spiritual experience. There were many times that I shared my memories and there were times that I took some quiet moments to pay tribute to Ben. I even took the opportunity to thank Mickey, Minnie and Buzz for giving Ben such joy during his battle with ALS when we visited Walt Disney World. There were laughs about our silly adventures, as well as tears shed for missing him and grieving the time he was cheated on this earth and we were cheated of being together. There were photos I enjoyed having with everyone else, and a few that I needed to have by myself because I had them with Ben and I needed to show myself that although things were different, I was still okay and Ben was still with me. What I learned was that it was a comfort to be able to conjure Ben and once again be a part of Walt Disney World and its most special Halloween celebration. I was part of the planning and the choices, I laughed and had fun, and saw things through the eyes of my friends, knowing that Ben was still a vital part of our trip. Although at times I felt like I was watching myself as I reacted to the experiences, I was not just a spectator, I was one of the happy partygoers. I was back in the Disney magic, singing and dancing along with “It’s a Small World,” just as I did with Ben and still having a fantastic time in honor and in memory of him and of us but also in celebration of life and the gratitude I have for such wonderful friends. 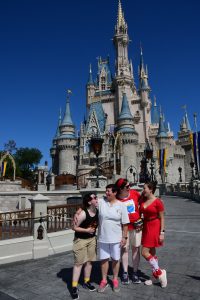 Looking back and being happy in the now!

I was not certain before I boarded the plan to Orlando, but I was ready to return. I was also well supported. Being able to look back and take that love and those memories with me allowed me to embrace the now rather than just watch it go by.

Sorry, Edna, darling, you may understand fashion, but you don’t understand grief.

Never losing sight of that I’m really not alone (and I don’t just mean those ghosty ghost buddies).

Happy 52nd Anniversary to The Jungle Book- With Thanks for Its Lessons on Caregiving and Fighting the Shere Khans Happy Birthday, Mickey Mouse!