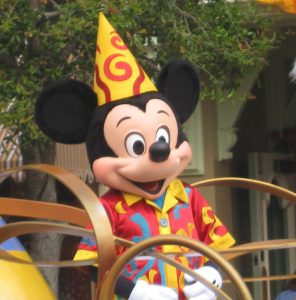 You may turn 91 today, but you are the eternal child who brings out the inner child in all of us. Walt Disney said to remember that it all started with a mouse, and what a special mouse you are! 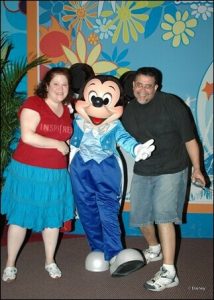 I miss my mom and Ben today. They would surely have joined in the festivities. I must admit that I feel pretty lonely at times like these. But, I’m celebrating the long history that we have and remembering wonderful, whimsical times with and about you.

Though you’re a few years older than my mom would have been, she loved you from the time she was a child and she passed that love on to me. She was in her 50s when she and my dad went to Walt Disney World for the first and only time, and without me! I will never forget her phone call, giggling as she exclaimed, “Abby, I met Mickey!” This picture was taken on that day, and it is my favorite picture of my parents because, for me, it captures my mom at such a happy moment with her inner child aglow, and my dad was so amused. When I picked them up at the airport, my mom deplaned like the other children, unabashedly carrying a big Mickey Mouse and Epcot Figment in her arms. My mom was the consummate child at heart, and I get that from her! 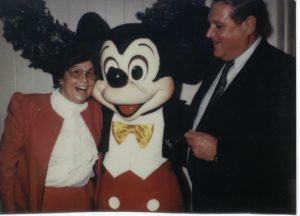 When I first started dating Ben, he was not as obsessed with Disney as I was. That changed quickly, and our first dates often began with a stroll through the Disney Store that was near the office where we worked and met. We went to every new Disney film on opening day and we practically studied the Disney Catalogs, which, sadly, are no longer published. I found several copies that he kept because he loved the covers and I’ve kept those.

We always treasured our visits to Walt Disney World, but after Ben’s ALS diagnosis, we immediately booked a trip to Walt Disney World, and we were so fortunate to be able to go four more times. We didn’t know what we were dealing with, or how much time we had, and we wanted to go to the place that made all our worries disappear, at least temporarily. 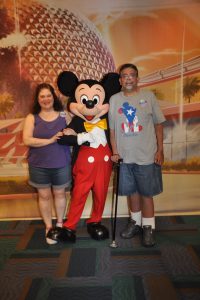 I admit that I was the one who had to greet all of my Disney friends. But, with you it was different. Ben always wanted to see you (and Minnie). And, after his ALS diagnosis, it was emotional and tear-filled. With an ALS diagnosis, we wanted and needed to feel the pixie dust, and more than once I asked you for some magic. I do remember that a sensitive cast member saw that Ben’s meeting with you was deeper than just seeing a favorite Disney friend. As we left, he quietly handed me a “ruby” that he told us was found by one of Snow White’s dwarfs in the mines, and he said he hoped it made our wishes come true. I still have it. It may not have fulfilled the wish that ALS would be cured, but I still believe that it helped us to create many wonderful memories. I thank you for that. 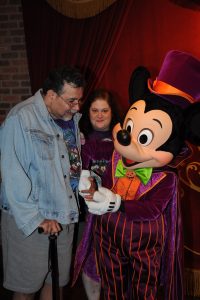 Mickey was always there to help Ben.

For as long as he could, Ben would insist on walking to stand in his pictures with you. It was truly touching when you spotted Ben in the electric wheelchair, helped him up and escorted him to the area where photos would be taken. He rode up to you when he lost the strength in his legs. It was then that I was hit with the reality of his situation. It might seem strange that this moment was a revelation, when I was living with his ALS. But, living with something didn’t mean I really reflected on the entire situation. We adapted to the issues as they arose without really looking at them as milestones in the progression of the disease. Deciding that he could no longer walk up to you was a sign that ALS was winning the battle. But, Ben also had an incredible attitude, never lost his smile and laughter, and he remained determined to engage in life, especially with you at Walt Disney World. 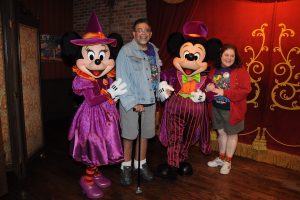 You and your friends brought us a lot of joy at very trying times. You welcomed us into your kingdom and gave us fantastic memories. Since he has been gone, you have continued to entertain, console and inspire me. I was so happy to see you and Minnie when I returned to Walt Disney World back in October. Although sadness loomed due to Ben’s absence, a hug from you let me connect with the past, feel secure in the present and know that I can count on you when I hit bumps in the road in the future. That’s quite a gift to me, but it’s your birthday, so I would like to shower you with tremendous gratitude, loyalty and love. 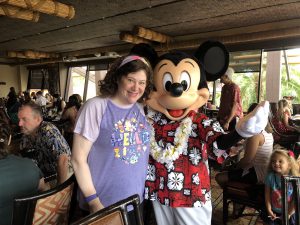 Happy Birthday, Mickey. May you always continue to be the spark of hope, inspiration and happiness for children of all ages.

What Edna Mode Didn’t Know About Grief Gratitude: A Super Power at Thanksgiving, but also In Caregiving, Grief and Always!