Today, February 21, is Ben’s birthday. This is another of the February milestone dates that I dread. It is the fifth birthday without him, and I can’t help but ask myself how many of his birthdays I am going to feel like this. The truth is that I have gotten used to the waves of sadness and loneliness. I didn’t know how I would feel today but I go with the flow of my emotions. I don’t convince myself that I have to be miserable, I don’t punish myself, and I don’t anticipate anything other than that I don’t know how I am going to feel and that I will be okay with whatever mood hits. The sadness and loneliness don’t paralyze me the way they did, but the bursts of tears remain.

I thought that I might run a few errands today, but I can’t seem to get myself off the sofa, preferring to wear Ben’s flannel Mickey Mouse pajamas (my cat Disney and I had matching ones) and immerse myself in Ben’s favorite Disney and Pixar films. I already watched Monsters, Inc. I cried when Boo said good-bye to Sully. I can’t help but relive saying good-bye to Ben. It will always be painful, especially on days like today. There is no distraction from tears  or from the pain. But Ben loved Sully, and when they met, Sully was compassionate and funny. 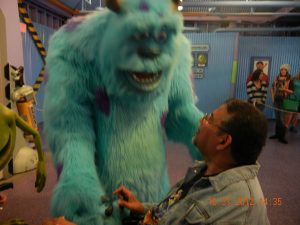 2012- Sully escorted Ben for his photograph!

Today also happens to be National Caregivers Day, which honors the health care professionals across the country providing long-term and hospice care. It always falls on the third Friday of February. I don’t remember being aware of this day when Ben was ill. I do remain grateful to and in contact with some of the professionals who cared for Ben. Although I was not a professional caregiver, I was a devoted one, and the memories of being Ben’s caregiver are among my most difficult and frustrating, while at the same time they are my most loving and significant. I am fortunate to have a wealth of good memories from our sixteen years together. I do tend to separate them into our pre-ALS and ALS days. Being a caregiver, for Ben and for my dad, brought out who I am at my core, and it also changed me, I hope for the better. I was able to find a stronger voice as an advocate for them, and I suppose now it’s time to use that voice for myself. I have a lot of work to do in that regard. I’m definitely better at caring for others and I prefer it.

I watched the video that I made on Ben’s birthday the first year I was without him, which I have placed here again. I miss Ben and I miss making a fuss on his birthday. When he was homebound, I decorated our apartment after I put him to bed so he would have a fun surprise in the morning. He knew I was decorating but never knew exactly what he would find, and that delighted him. When I look back, I think that making the video was my way of continuing to create a birthday celebration for him. There are photos of his birthdays and other happy occasions, and, of course, some Walt Disney World photos. Some were taken when he had ALS and some in the pre-ALS days. The love is palpable in all of the memories. I guess it will always be jarring but sweet to hear The Beatles’, “Happy Birthday.” Ben woke me up with that song every year on my birthday. Now, I am playing it for him. I do believe that he played it for me when I visited Walt Disney World and listened to the band he loved. When I watch the video now, I remember the grief that I felt as I poured through and selected the images. Still, I do find it comforting to revisit beautiful memories. That doesn’t mean that it doesn’t come with tears, but tears are okay. So are smiles. All of the memories, even through the darkest days of grief, play along with the video but I am reminded that I will be okay and Ben is still with me.

Ben’s birthday always falls during the week that the schools have a mid-winter break. I’m glad that I have the time without having to be “on” in the classroom. I have enjoyed having some time to organize my apartment. This meant going through some of Ben’s things, particularly computer and electronics related items. I threw out things that I had been keeping only because they were his. I brought several old laptops to be recycled. I talked aloud to Ben throughout the process. It’s taken all this time, but once I realized that they brought no particular joy or memories, and that even Ben had mindlessly tossed these things into boxes rather than throw them out, I was more able to part with them. Still, the mere action of having to go through his things without him was stressful. Maybe my timing was not great. As I said, I never know how things will feel so I just go with it.

I did pick up Ben’s favorite meal from our local store and will have that for dinner. I so often think of how Ben wanted to be able to eat the foods he loved, and how I always say that I hope that he is now eating, walking and singing, free of the constraints of ALS. For the first time, the idea struck me to have one of his favorite meals in his honor, with the knowledge in my heart that he can now enjoy that freedom. In my opinion, there is no “right” way to deal with events like this. If I had felt like I did not want to do anything special for Ben’s birthday, and just share a quiet thought of him, that would have been fine, too. I feel no compulsion to defend myself. That, in itself, feels like progress!

As I wrote last year, there is no candle on a cake now, but always wishes that Ben is comfortable and at peace. Also, wishes for a cure for ALS, because wishes do come true.  As Cinderella’s Fairy Godmother says, “even miracles take a little time.”

When Ben proposed to me at Walt Disney World, he asked me to be His Minnie. So, on his birthday, I say
Happy Birthday, My Mickey!
With much love and pixie dust,

Happy Birthday Daddy and Cinderella! Thank You For The Life Lessons! Grandma- Always in My Heart