Being like Hercules- Going the Distance in Caregiving, Grief and Life 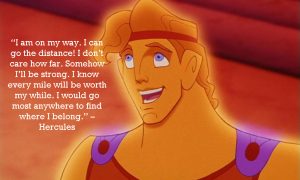 Disney’s Hercules opened on this date in 1997. It made me think of the Herculean tasks of caregiving, grief and recreating my life. After nearly six years without Ben, I still find myself thinking I am on my way. I can go the distance.  Somehow, I wonder if I will ever get where I’m going and if I will know where I belong if/when I get there.

I think back to caregiving days and I often had to cheer myself on and cheer on Ben and my dad. Ben was actually great at motivating himself. I can picture him singing this song from “Hercules” with a big smile on his face. I still have such great admiration for how he was inventive and determined to maintain as normal a life as possible despite the abilities ALS was stripping away. I was there to help him accomplish his goals, make him smile, and do for and with him what he could not do on his own. Although it was heartbreaking, and at times very tense, we did have a lot of laughs. But, he really did strive to go the distance, right up until he left this world. I remain in awe of his bravery and strength.

My dad was another story, spending seven years counting down to his impending demise. We joked about his negative attitude, but at times it did drain and frustrate me to the point of tears. I was his cheerleader, and it did give me immeasurable joy and satisfaction to hear from him and from so many people that I was his life. I was a Daddy’s girl, and he was my life, too. My dad loved history, he was a very proud Marine, and he loved to read. I spent much time calling him from bookstores to read aloud book jacket descriptions of new books about World War II. It was hard to find books with an angle he did not know. When he asked a lot of questions about a book I described but concluded by saying that I should not buy the book because, “where I’m going I won’t need books,” I knew I had a winner. Ben and I also found lots of World War II documentaries for my dad to watch, and he and I frequently watched one of his favorite films, Mrs. Miniver. I had to go the distance and be strong to find ways to give my dad strength and optimism. That was indeed a Herculean task!

Living with and succumbing to a terminal illness is indeed courageous. Caregiving, too, requires super powers. When I was exhausted, or feeling downtrodden as a caregiver, I had to force myself to believe that I could be strong and that I could “go the distance.” Sometimes, it was a matter of reflecting on the difficult time that Ben and my dad were having, physically and emotionally. I was the caregiver, but they were the patients. I think back to the times that I just managed to keep Ben from falling, which, given my own lack of coordination, was quite a surprising feat to accomplish, and in those instances, he called me Wonder Woman. He even got me a Wonder Woman t-shirt. Those shows of strength did take a physical toll on me, but every mile was worth my while. I knew that I belonged at Ben’s side. And, in retrospect, I learned a lot about myself in that process. It brings me to my favorite Christopher Robin quote, “You are braver than you believe, stronger than you seem, and smarter than you think.”

Managing grief has been another Herculean task. The ups and downs have been become less jarring, but I cheer myself on, more successfully on some days than on others. I have definitely stepped back into the world of the living again. I am more comfortable in, or better resigned to, my routine of living alone, and I enjoy with less guilt the freedom to socialize and to do things I love, like going to the theater and traveling (with the exception of COVID restrictions). I find peace and inspiration during my strolls through Central Park, where I do see signs of Ben from time to time. Ben remains very present in our apartment in photographs, things of his that give me comfort, and things of ours that bring good memories.

When I think of the future, I still have to convince myself to go the distance. It’s not easy for me to perceive myself as strong, though intellectually, I know that I have shown physical and emotional resilience over the past several years. I have blogged about my memories, and living with my present, but the future remains daunting. I am doing more writing and exploring ideas with regard to caregiving kids, trying to see beyond teaching, which, although rewarding in many ways, is very stressful and a constant reminder of my gut feeling that I was never meant to be in a school building. Then, there is the search for love. My relationship with Ben brought so much to my life, and I do desire to find love again. I believe that Ben would want that for me, too. After sixteen years with Ben, it is very challenging to be vulnerable again. Armed with my Disney soul, I still believe that I can have a happy ending, so, I have to believe that, as with Hercules, I know every mile will be worth my while. I would go most anywhere to find where I belong. I’ll keep you posted…